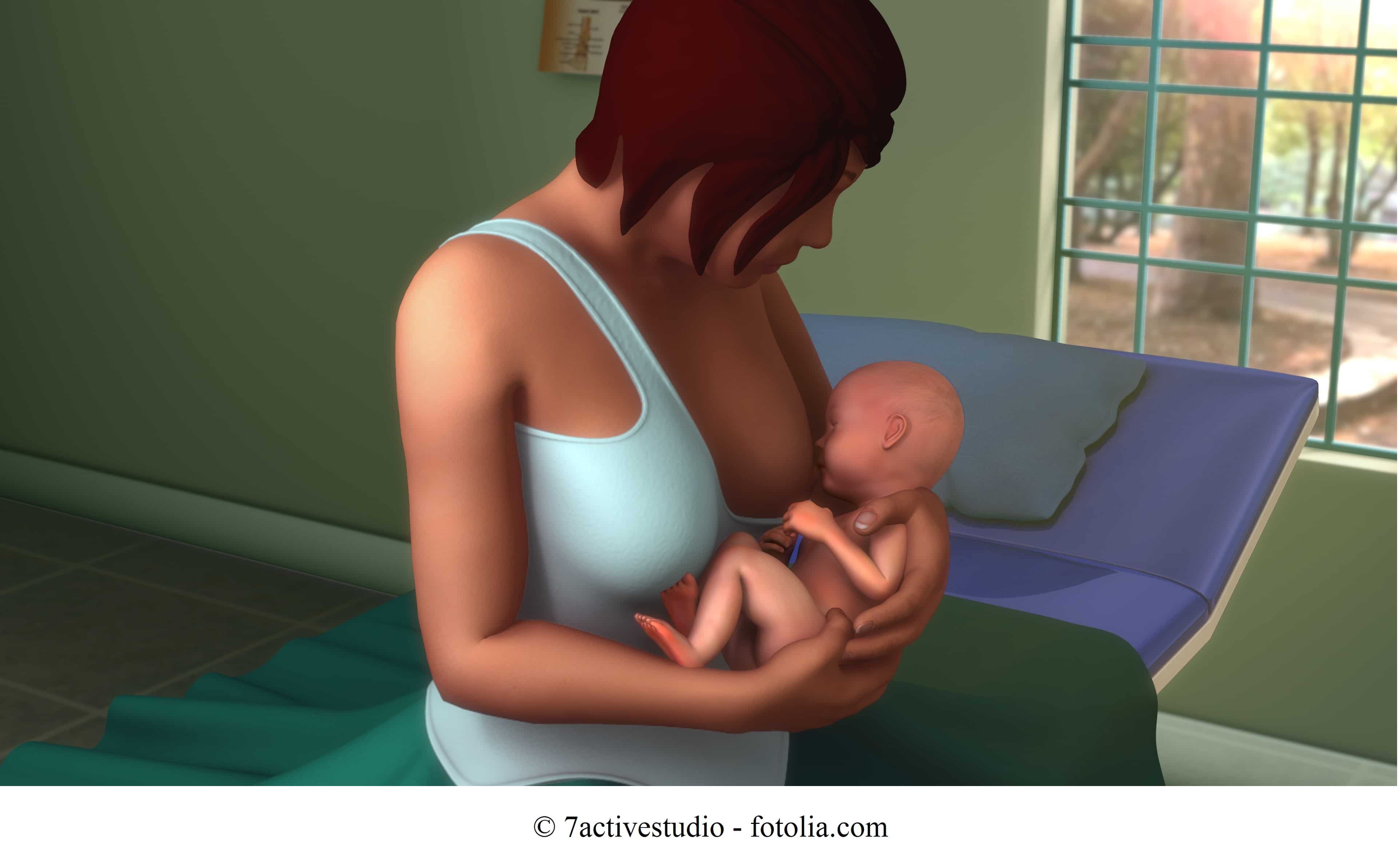 What are the benefits of breastfeeding for the child?
Breast milk is the ideal food for infants.

It contains the right mix of vitamins, proteins and fats. This liquid is digested more easily than artificial milk.
The benefits include that breast milk contains antibodies that help the child fight viruses and bacteria.
The mother should continue breastfeeding even if she has a fever.
Breastfeeding reduces the child’s risk of developing asthma or allergies.
In addition, children who are breastfed exclusively for the first 6 months (without milk powder) are less prone to ear infections (otitis), respiratory diseases and attacks of diarrhea.
This is especially important for premature babies who are more prone to infections.

Some studies indicate that breastfeeding is associated with higher childhood IQ values.
In addition, physical proximity, skin and eye contact help the child to build a special bond with the mother and to feel safe.
Breastfed children tend to have the right weight as they grow and are less overweight.
Breastfeeding is said to prevent sudden infant death.
If too much milk forms in the breast, the mother can suck off the excess with a breast pump.

How often should you breastfeed?

There is no rule here. The infant feeds according to his feeling of hunger, usually with about 8 milk meals a day, but it can also be more or less.

Are there any advantages for the mother when breastfeeding??

With chest pain and discharge of blood from the Breastfeeding should be continued with one breast side at a time, but a visit to the doctor is important to clarify the cause of the problem.
Blisters may form in the breast as a result of occlusion of the milk duct.
If the mother has a very large breast, she can support it with one hand while breastfeeding to help the child.

My breast will make enough milk?

In the first days after birth, the breast forms a "first milk" called colostrum.
The colostrum is viscous and yellowish, but completely satisfies the child’s nutritional needs.
Colostrum helps develop the baby’s digestive tract and prepares it for digesting breast milk.
Most children lose weight easily in the first 3-5 days after birth. This is not related to breastfeeding.
If the child needs more milk, the breast produces more milk accordingly.
Breast milk is also sufficient for twins.
Experts recommend breastfeeding exclusively on the mother’s breast for six months (without milk powder, juices or water).
If the mother also feeds powdered milk, the breast could produce less milk.
Breastfeeding for less than six months is better than not breastfeeding at all.
Solid foods can be added as soon as the child is 6 months old, but you must continue breastfeeding to continue producing milk.

However, sometimes insufficient milk production can lead to child malnutrition.
In these cases, a milk mixture may be required: breast milk and milk powder.

The mother is often worried if the child does not belch after drinking. But it can be completely calm, because this is not necessary for digestion.
If the child swallows air, the cause may be insufficient contact with the areola.
Hiccups can be caused by drinking too quickly.

Why does the mother have little milk??

Decreased milk production can occur temporarily if the mother does not nourish the child adequately, often due to nipple pain or because she does not fit the child properly.
A disease or oral contraceptives that contain estrogens could also affect milk production.
In some women, special biological or physical circumstances (such as a hormonal disorder or breast surgery) can reduce milk production.
For most women, the real problem is not milk production, but giving milk to the child.
The women produce a lot of milk, but for certain reasons (for example, because the child is not properly positioned) the infant does not get enough milk.

How can you tell if the child is drinking enough milk??

The mother should breastfeed whenever the child is hungry. But always keep the following in mind:

The child gains about 30 g per day in the first three months and about 15 g per day between the 3rd and 6th month.
Children usually lose some weight in the first few days after birth.
Between the 10th and 14th day after the birth, the child should have reached its birth weight again. The weight gain is the best evidence that the child is drinking enough milk.
In the first month, the child has bowel movements at least three times a day, which becomes lighter and mustard-colored from the fifth day after birth.
After the first month, bowel movements are less frequent. Some children have no bowel movements for a day or two.
The child often drinks milk (every two or three hours), making a total of eight milk meals a day, for which it is best to set predetermined times.
You can hear the child swallow and sometimes you can see the milk in the corners of the mouth.
The child appears healthy and active.
The child uses 7 or 8 diapers a day or 5 to 6 single diapers.
The disposable diapers absorb more liquid and you can hardly tell whether they are wet or not.
To determine whether the child pee, you can compare the weight of the used diaper with an unused diaper.
A wet diaper is a little heavier.

Aesthetic breast surgery
After breast augmentation, the mother can continue to breastfeed, while breastfeeding after breast reduction is more difficult.

Drinking lazy infant
If the child falls asleep while breastfeeding and sucks little, it is recommended to squeeze or massage the breast so that the milk can escape more easily.
If the baby is lazy to drink and does not wake up often enough, you should wake him up to breastfeed.

Colic of the infant
If the baby has colic, the cause could be an allergy to milk protein, an intestinal obstruction, a hernia, etc..
You should see a doctor to clear up the problem, but it is better to continue breastfeeding.

constipation
The infant rarely suffers from constipation, but bowel movements can become difficult because the sphincter of the anus does not relax.

Spit
Spitting in infants is common and physiological. However, if the child suffers from this, it is advisable to repeat the meal more often, but for a shorter period of time.

What should you eat? Maternal nutrition

Drink a lot
It is important to drink plenty of water during this phase.
During the birth, the body loses a lot of water and the mother has increased thirst.

Many calories are needed
A nutritious diet is important for mothers who are breastfeeding and is therefore an integral part of their diet. A nursing mother uses 500 calories a day to produce milk for the child.

Iron and folic acid
Eating foods high in iron and vitamin B9 is an essential part of the diet during breastfeeding. Folic acid is a vital nutrient for the development of the child’s nervous system.

What should you eat to increase breast milk??

To increase milk, you should eat lots of fruits and vegetables.

Food to avoid
Some types of food (such as spicy or flatulent foods) change the taste of milk.
Foods and substances that should be avoided because they can irritate the child are:

How long should you breastfeed??

The weaning time is different for each mother and child.

How to stop breastfeeding

While the child is still breastfeeding, it often happens that the cycle is delayed by a few weeks or even months.
This timing can be different for every woman and also depends on several other factors. While some women resume their normal cycle after 6 weeks, others cannot get their menstruation for 12 months or more.

When to expect the first cycle after breastfeeding?

As already said, the resumption of menstruation after breastfeeding is in progress everyone Woman different. The whole thing is bound to the hormones, and since every woman has a different hormone level, the cycles also occur at different times.

Women who have breastfed their children exclusively and often can be sterile for a long time. On the other hand, women who wean their children prematurely can already have their cycle a week or two after weaning. Children who get used to solid food at an early age are less dependent on breast milk alone for their nutritional needs. As a result, menstruation begins with these mothers rather than women who breastfeed the children exclusively for many months.

What to expect
The first menstrual period after birth may or may not occur as usual. It can be weaker than the normal cycle or characterized by severe hemorrhage.

It can only last a few days or a week or more. You may or may not have premenstrual syndrome before the end of the menses. Light abdominal cramps are common during this cycle. In short, some variations in the cycle are considered completely normal. Nevertheless, you should immediately inform the gynecologist about symptoms such as intense abdominal pain.
Women rarely start normal ovulation before the cycle begins. Nevertheless, there have been cases where women have become pregnant within a month of birth.

Sexual intercourse and contraceptive pill
The woman can become pregnant while breastfeeding.
Oral contraceptives should not be used to avoid harming the child, but there are some pills that are allowed. In this regard, it is recommended to consult the gynecologist.