The association “Children help children – limitless!” E.V..
was founded almost 20 years ago as an initiative and has existed as a registered association for around 15 years.

In the past, the initiative and the association have attracted attention with various small and large projects.
The primary task of the association is to support the child and youth welfare organizations of the Salesians Don Boscos in Brazil.

In the spirit of the founder of the order, Don Bosco, children and young people, especially those from poor backgrounds, are supported and trained in schools and workshops.

To the social Membership fees of our association will be used to support institutions. Likewise, all donations and earnings through campaigns like crepes to bake and children’s games used at family celebrations. We also organized the Brasil Festival several times in Mülheim. Another project was the Kinderlebens (t) räum, a project with Mülheim elementary schools.

Write to us if you would like to receive further information about our association.

If you would like to become a member, we will be happy to send you a registration form, or you can download it directly here: SEPA admission form 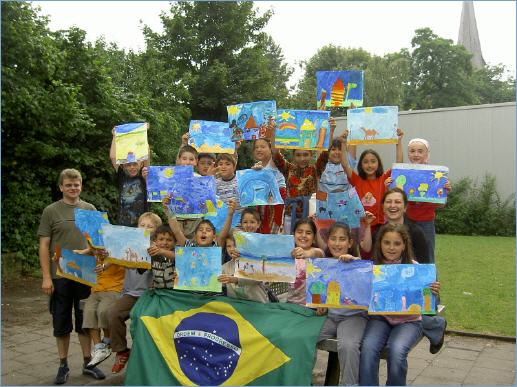 Current
December 2015
This year it was a bit quieter in our "club life", however, thanks to the numerous donations in the past and this year as well as the campaigns in 2014, we were able to hand over EUR 10,000 to Father Renato in Curitiba. Of which were
– a car for the social facility in Guarapuava as well
– Play equipment for the PROVIM social facility in Curitiba
be concerned. For this purpose, on the “Projects” page you will find the pictures of the donations as well as the photo of the official money transfer.

Next year, at the European Championships in France, we would like to organize a betting game again. Here, too, 50% of the participation fees should go directly to Brazil, while the remaining 50% fill the prize pool for the tippers. We would be very happy if a great number of Mittipper from 2014 can be reached again.

happy and blessed christmas and a happy new year!