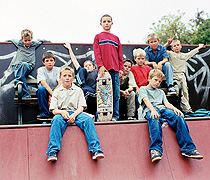 Children vary their behavior depending on the location

Several girls in a heap – this is extremely interesting. Parents can hear when girls play “family” together. And then mom suddenly hears herself! She speaks with a child’s voice, but is otherwise correct everything: That sounds a little old-fashioned, a bit too annoyed, but very, very well imitated.
The girls have just discovered the indoor-outdoor or so-and-so game, and they play it amazingly perfectly: In the family, we behave very specifically, with girlfriends differently, again differently at school or with the strict swimming instructor. Children know this much earlier than we think. They are social chameleons and, because of their enormous learning ability, can vary the sides of their personality that they want to show in all kinds of places. It is astonishing that children see through this themselves at the age of nine or ten, like here in the role play (“If mom looks like this” – very fitting face – “then I have to pretend”).
Children understand exactly: There are suitable recipes for how to give yourself at home and elsewhere. And the children vary them virtuously.
A boy with three smaller siblings, the youngest not even a year old, can be an attention-grabbing veteran and big-brother cool. He knows how to hide his more civilized, possibly image-damaging talents. But he has it. If the child politely thanks a strange, not so familiar person or is courteous, the parents may be surprised. Because you don’t know that from the boy at home.

Children develop different forms of behavior depending on the situation

That is normal, explains Dr. Axel Schmidt, social scientist at the University of Basel. “You can observe this in every school class and even in kindergarten. The kindergarten teacher does similar things to the mother, but is role-bound: the situation is different. And then other forms of behavior develop: You can demand emotional encouragement from the kindergarten teacher as well as from the mother, and the child also senses that this is not appropriate in the group, since other children are involved. “Again, social role play works differently, where Children and adolescents are among themselves – first of all there is eye level. And this creates its own language, new rituals develop, and everything works quite differently than in the areas of life in which adults belong. There is competition, not only in sports and games – and often big surprises. Children who are still at home and care for their dreams suddenly become stars. No one throws the ball so safely, no one speaks to the teacher so sensibly, no one hits the sound more precisely. And often to your own surprise. Special talents grow in groups, and it is often the only environment to discover them: No real hip-hop star has practiced rapping with mom. Maybe a flute, and a poem here and there. But he would never admit that. What he can do belongs outside.

Getting used to is a challenge for children

Getting used to is a challenge for children

In addition to the everyday behavior elsewhere, which is necessary and appropriate, there is also the different behavior of the transition. Every acclimatization to a new situation is a real achievement that requires effort and social intelligence from children and demands that we strengthen our backs. Even if it is difficult at first: getting to know other people, other customs, other groups is valuable. And developing antennas for how others tick and how to best approach them pays off for a lifetime. Where the whole thing goes off without constraint, it shows that the children find strange worlds exciting. To dine in a fine restaurant is an act of acting – today we play courtly table, and the young princesses and princes are allowed to nasally French and explore the advantages of serving forks. It works … Well, mostly. Helga Kotthoff, professor of linguistics at the Freiburg University of Education, emphasizes the skills of discovery from children – Equipped with an automatic search function, you gradually sense the finest nuances in social interaction, the gradations of power and closeness, sense where friendship attracts and where distance is required. As parents, we were able to experience this practically from the cradle with them.

Language and emotions are closely linked

Learning to speak only works as a social process, we now know – that’s why all instincts for the social context and how to move in it are always involved. Even the smallest read emotional vibrations from social contact. For example, I was visiting a friend from the university, and we were annoyed by an ex-fellow student and really got into this trouble. Until we noticed that her five-month-old son was also completely excited – his reaction to the excited tone of our conversation. However, only a few older children record and sort the wording and meaning of what they hear. And soon after that children start to catch
to develop their own language together. This, in turn, is something that sometimes puzzles us adults. Something like this: The boy can do grammar! Why is she suddenly gone when he talks to his friends? Just stammering and reducing speech !? One would have to intervene and tell the boys that they should use subordinate clauses, adhere to politeness and differentiate “as” and “how”! Or? No, we shouldn’t do that, says Helga Kotthoff – on the one hand it would be an unnecessary interference, on the other hand it would be as unsuccessful as telling hunters how strange it is to call a hare’s tail “flower”.

In a “peer group” there are separate rules

The bigger the children get, the more clearly we adults notice the difference between our own worlds and ours – there are separate laws in such a pack of youngsters, the “peer group”. It is the focus of Axel Schmidt’s research. He worked in a youth center for twelve years, groups and cliques became the subject of his doctoral thesis. “Of course, every outsider notices that things are very different there – maybe that”s dangerous?
But children have to learn to assert themselves in such a group. As a rule, parents cannot say: “You won”t go there anymore” – you can talk about what is happening out there, make it strong, play through situations. But what you can”t do with such a group, for example, is to go in and say, “Hey, there”s an outsider! Change that. ”He is already more of an outsider!

Our children have many faces. And nobody knows more about it than we do and can assess it better. This also helps if misunderstandings arise. Especially when they can be quickly dissolved in fun. For example, three-year-old Lucy had decided that it would be best to go into total immersion in your new music school, to look at a point in the air and to listen. You didn’t know that – nobody. Everywhere else, the rule was: Lucy sabers like a waterfall and does nothing without commenting on it – but in the music school: total inwardness.
Her mother Ute was surprised, the staff wondered worriedly: Is the little girl hard of hearing? Unnoticed deaf and dumb? Does she suffer from mutism? Autism? Educator Elif, and only she, had a different theory: all just an experiment, a game, the search for a safe bridge to the new world. So Elif sent everyone else aside, grabbed Lucy, took her to a corner, winked at her and whispered, "Put your shoes on." Crack. Broken ice. Lucy took the shoes and started for an extravagant lecture. She had saved enough to be told ….

Children have to learn flexibility

Children have to learn flexibility

Because what we have to learn for life is primarily adaptability, flexibility – “context sensitivity”, like experts say. "If you have that, you can give a lecture in polished language – but just as well fool around and express yourself incredibly reduced, for example with your very best friend," says Kotthoff. So there is no reason why we are nice and polite at home. And we can also explain very precisely how one should behave with Aunt Frieda or in the church. And of course it is right that different worlds out there also require different roles and rules – both from us and from our children. So if the teacher reacts annoyed because he is interrupted every five seconds, it does not mean that tomorrow our large, traditional dinner palaver will be abolished forever. But only that our beloved chatter belongs exactly at home and not in the class. Let’s make it something special: We have the great privilege of being able to understand four people at the same time, we know each other so well. Nobody can do that with 28 children. Everyone can understand that, even a first grader.