Flexibility. Scientists at the University of Vienna are going on the offensive against the government plan. Chancellor Sebastian Kurz calls for objectivity. There will be a demonstration on Saturday.

Vienna. The excitement about the planned expansion of the maximum daily working hours does not subside. The legislative amendment is to be passed in parliament in early July. The government plans to increase the maximum working hours to twelve hours a day and 60 hours a week. The Chamber of Labor and the union are up in arms, and a major demonstration in Vienna is planned for Saturday. On Wednesday, experts from the University of Vienna launched an offensive against the new Working Hours Act. They consistently reject the amendment – with different arguments.

The psychologist Gerhard Blasche from the Medical University mainly stumbles on the 60-hour week. Working longer than 52 to 55 hours increases the risk of heart attack and mental illnesses such as depression, anxiety disorders, and burnout. The twelve-hour day poses no sustainable health risk as long as enough recovery is planned. Studies with geriatric nurses would have shown that after two twelve-hour shifts, three days of rest are necessary.

The amendment to the Working Hours Act is to be passed in parliament in early July and will come into force on January 1, 2019. The maximum daily working hours are to be increased from ten to twelve hours a day and from 50 to 60 hours a week. Exceptions to the weekend and holiday rest should be possible up to four times a year. In tourism, the rest period should decrease from eleven to eight hours.

It is already allowed to work twelve hours a day and 60 hours a week if necessary. But only with a company agreement and an occupational medical report. That should disappear in the future. The government emphasizes that the eleventh and twelfth hours are voluntary. Normal working hours remain at eight hours a day, said Federal Chancellor Sebastian Kurz (ÖVP) on Wednesday and called on everyone involved to be objective. It is neither appropriate to cheer, nor to stir up fears with "wrong facts". And Vice Chancellor Heinz-Christian Strache: "Nobody can be forced to work longer".

Martin Risak, Lawyer at the Institute for Labor and Social Law sees things differently. The government program announced that more flexible working hours should be made possible in agreement with the employees or the works council. In the draft law there is no longer any question of employee participation. He criticizes also the Planned expansion of the term “executive employee”. These employees have extensive decision-making powers and are exempt from the Working Hours Act. For those affected, this would mean no overtime bonuses. 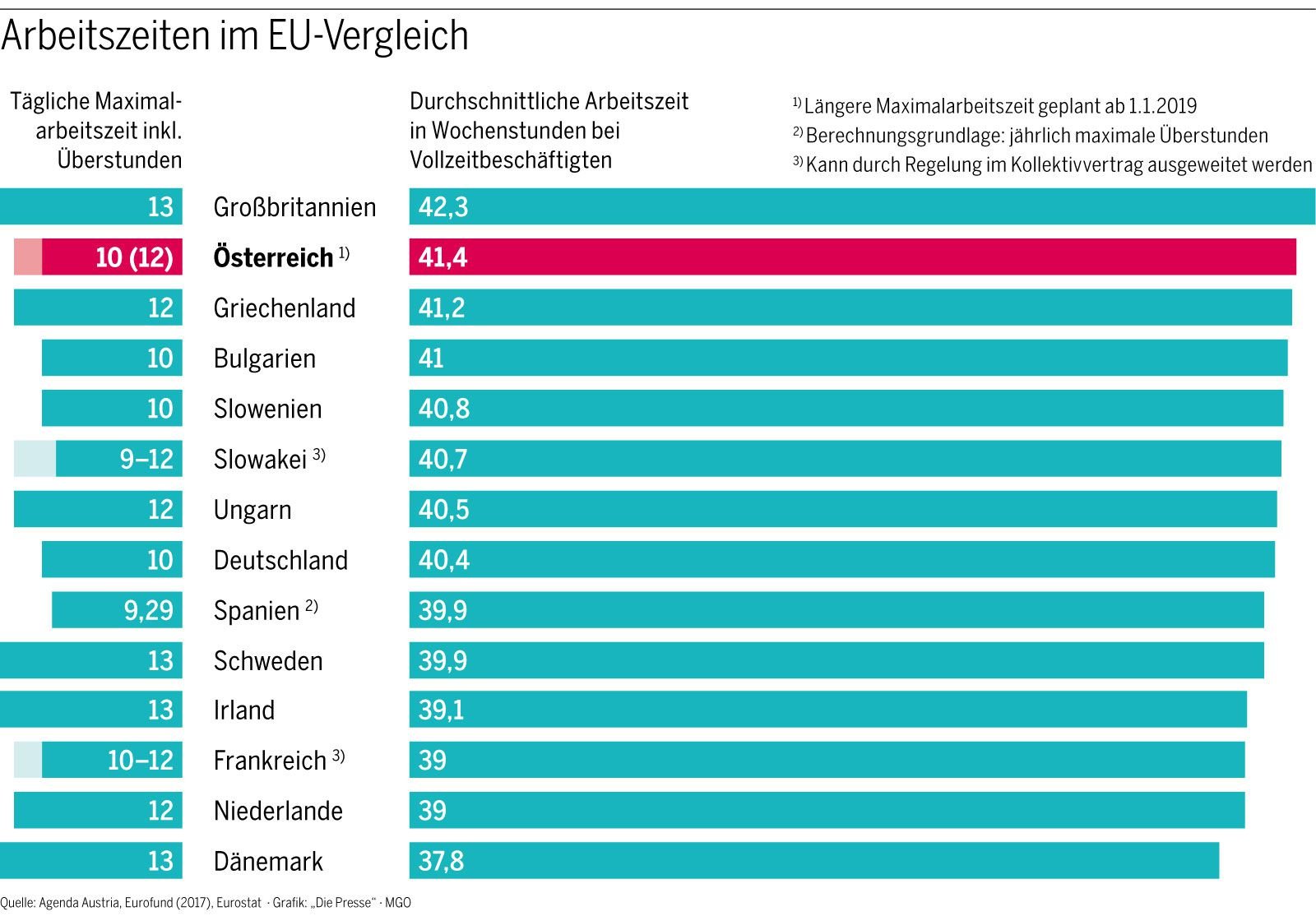 In order to make the law “more bearable”, the extra work would have to be compensated for at least with more breaks, Risak demands. At the moment there is work from six hours half a hour Break required, but unpaid. The break would have to be paid. From ten hours of work, a second half-hour paid break should also be introduced, Risak said.

In other EU countries, twelve hours of work a day are already allowed in the flagship countries Sweden and Denmark even 13. The sociologist Jörg Flecker, who researches work and employment at the University of Vienna, notes, however, that in Denmark there is a “culture of short working hours”. In Sweden, too, the workers went home at 5:00 p.m., "That’s where the railroad goes over".

In fact, Austria is one of the EU’s top working hours: According to Eurostat, full-time employees work 41.4 hours a week, in Denmark 37.8 hours. The Chamber of Commerce puts these figures into perspective: If holidays and public holidays, which are more generous in Austria than in the EU, are included, the weekly working time drops to 39.6 hours.

Twelve-hour days are particularly problematic for single parents and families in which both parents work full-time. The plan is based on the “full-time father, part-time mother” model and could promote this further. Institutional childcare is not geared towards twelve-hour days: neither are the opening hours long enough, nor can the length of care be extended on a daily basis. (Am)