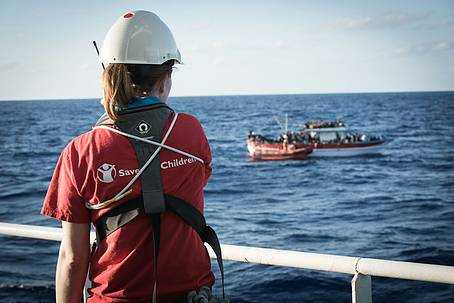 Since this weekend, the Libyan Navy has been claiming a zone of 70 nautical miles as its own operating area, in contravention of applicable maritime law. After rescue ships were prevented from their life-saving activities by warning shots, Save the Children anchored their own rescue ship “Vos Hestia” on Malta to check and re-evaluate the situation.

According to reports, a rescue vessel of an aid organisation was forced by the Libyan authorities to stop its operation in the rescue zone – 27 nautical miles from the Libyan coast. Save the Children is shocked by these disturbing reports of a humanitarian threat. The developments underline the concerns of Save the Children and other NGOs about the safety of teams in the newly imposed Libyan rescue zone.

Rob MacGillivray, Chief of Operations of the Save the Children Rescue Ship, says: “The attempt to attack a humanitarian actor in international waters is abhorrent. It’s obviously not safe to be in the Libyan rescue zone. And the absence of aid agencies leads to a worrying state of invisibility – no one knows exactly whether migrants are in distress or being pushed back on their desperate flight from Libya.”

Save the Children fears that due to the worsening situation, many refugees will no longer be helped in time, as most poorly equipped ships are in distress only a few kilometres off the Libyan coast.

Under the given circumstances, however, the risk for rescuers is too great. However, Save the Children remains ready to resume rescue activities as soon as safety conditions are restored.

In the meantime, Save the Children International is also examining how the refugees in Libya can be supported.

More information can be found in the message below:

Save the Children’s Search and Rescue vessel to dock in Malta, as Libyan Navy assume control of International waters

Save the Children’s Search and Rescue operation has saved the lives of many vulnerable people who are risking their lives to flee to Europe, including unaccompanied children and babies with their parents. It is with deep regret that we have been forced to pause our Search and Rescue operation in the Mediterranean, as a result of issues raised by the Libyan Navy, which pose uncertainty for our response. The Vos Hestia remains on standby and ready to respond, once vital safety and security assurances are in place.

It has been reported that the Libyan authorities have now increased their SAR zone from 12NM to 70NM from their shoreline, well into what many consider to be International waters. The Vos Hestia is now heading for Malta, where it will dock, whilst our senior team assess the safety implications of this constantly changing situation.

Reports of the Libyan Navy’s intention to control the International waters, in which Save the Children searches for stricken vessels and rescues those at risk of drowning, is of great concern when considering the safety and security of our staff, ship and ability to carry out rescue missions effectively.

The staff and crew on the Vos Hestia standby ready and willing to carry out the lifesaving rescue mission they came on board to do.

Operation director Rob MacGillivray said : “Our experienced team on board are concerned that in this situation boats will either be turned back to Libya, or, migrants will die before they leave the newly extended Libyan SAR zone. People are crossing on flimsy rubber boats that take in water and don’t carry enough fuel. It is also not clear if by entering that area, our operation may be in danger. What is clear is that life could be lost amid this confusion with less rescue capacity in the area.

“Save the Children is ready and eager to deploy our vessel to the rescue zone. However we have a duty to ensure the safety of our team and the viability of the rescue mission. We need to have these assurances in place, before we can continue with the rescue mission as intended. The safety of our staff and crew is paramount and without assurances we would have to consider the possibility of a suspension – an outcome none of our staff or crew want to face.”

Save the Children is also concerned that other SAR actors have had to take the decision to suspend their operations, diminishing rescue capacity further.

“We understand how difficult this decision is and respect the action of those NGOs who have been working to save lives in the Mediterranean. The necessary pause in operations from charity rescue ships likes ours and others will undoubtedly put lives at risk. Search and Rescue capacity is diminishing but the need continues.” Said MacGillivray.

Save the Children welcomes any increased capacity to save lives in the Mediterranean, where already thousands of people have drowned this year. However, the charity has long raised concerns about the prospect of migrants and refugees being forced back to Libya, which the UN officially deems unsafe.*

For those escaping conflict or persecution and seeking asylum or International protection, Europe must ensure their human rights and dignity are respected, so people do not risk their lives attempting to reach safety in Europe.

*Reports from inside Libya include incidents of people being beaten, whipped and hung from trees. We have heard countless reports of women and children suffering persecution, beating and rape. Many of the children we have saved report being physically or sexually abused by smugglers or subjected to forced labour and forced recruitment by armed groups. Many migrants tell us that they didn’t plan to come to Europe, but that life in Libya is untenable.