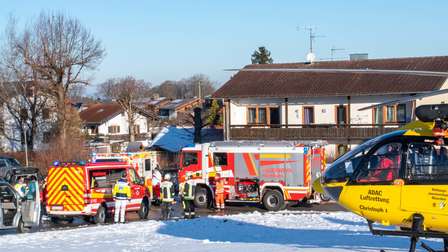 A serious accident occurred in irschenberg late this morning in a residential area. A girl (5) suffered life-threatening injuries and later succumbed to her injuries in hospital.

Irschenberg – a girl (5) succumbed on wednesday to serious injuries sustained in a traffic accident in irschenberg a few hours earlier. According to police, the five-year-old girl, secured with a seat belt and booster seat, was sitting in the passenger seat of the VW Beetle driven by her mother, a 32-year-old woman from irschenberg, at around 9 a.m. on anzinger strabe from the north in the direction of the district savings bank. At the fork in anzinger strabe, the woman wanted to continue in the direction of miesbacher strabe, when a 32-year-old woman from irschenberg in a vw sharan, who wanted to continue north, came towards her. Both vehicles intended to pass each other, but collided head-on.

the cars were each damaged in the front left area. The airbags deployed. Both riders survived the accident unharmed. tom niggl, commander of the fire department irschenberg and head of the rescue operation on site, says: "at first glance it didn’t seem like a dramatic accident."

Nevertheless, the five-year-old daughter of the beetle driver suffered life-threatening injuries in the collision. when niggl arrived at the scene of the accident, first responders had already extricated the girl from the car and started to revive her. According to niggl, among them were some firefighters who had passed by the accident on their way to the fire station and had helped immediately. A rescue helicopter later flew the girl to a munich hospital. Shortly before 1 p.m., the police reported her death.

The officers are now investigating the exact cause of the accident. Because of the comparatively minor damage to the vehicles and the fact that both drivers were uninjured, the officers assume that both cars were traveling at an appropriate speed. the public prosecutor’s office has commissioned an accident analysis report. This should also clarify why the girl suffered such serious injuries despite low speed. Both vehicles were impounded and towed away.

At the scene of the accident was a large contingent of rescue workers in action. the irschenberg fire department was on the scene with two vehicles and ten people; in addition to the rescue helicopter, two ambulances and the miesbach police were also on the scene.

According to niggl, the fire department ended its mission after just under two hours. For their debriefing, he and his men received support from a chaplain for emergency personnel. Niggl: "with children it is a special and difficult situation. You’ll be glad to get help for the soul."

Update 12.55 o’clock: the miesbach police department has announced that the girl has since died as a result of her serious injuries. The child was five, not four years old as initially reported.

Police report 12.30 o’clock: the serious traffic accident occurred today, wednesday, at around 9 a.m. in irschenberg. As reported by the miesbach police department, a 32-year-old woman from irschenberg was driving her VW beetle on anzinger strabe in the direction of kreissparkasse/miesbacher strabe. At the same time, a 32-year-old woman from irschenberg in a VW sharan was coming towards her and wanted to follow the road to the left. The two vehicles collided with each other head-on. 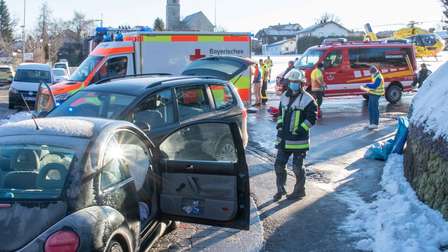 The Beetle driver’s four-year-old daughter was sitting in the passenger seat and suffered serious or life-threatening injuries in the collision. The child had to be flown to a hospital in munich by rescue helicopter.

The public prosecutor’s office commissioned an accident analysis report to clarify the exact course of the accident. Both vehicles were impounded and towed away for the incident. At the scene of the accident was a large contingent of rescue workers and the fire department irschenberg and the police inspection miesbach.

Initial report 10 o’clock: at the intersection of miesbacher/anzinger strabe in irschenberg, a traffic accident occurred late this morning, apparently injuring one or more persons. Two cars collided head-on in a bend below the branch of the kreissparkasse savings bank. In addition to the police, fire department and rescue services, a rescue helicopter was also deployed, which was able to land on the adjacent meadow. Report follows.