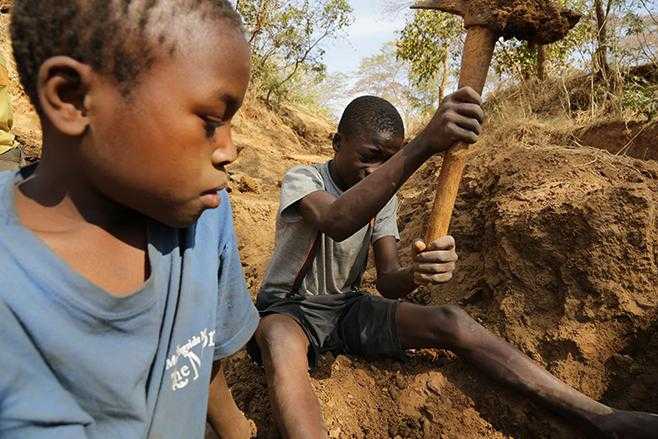 Two 13-year-olds search for gold in a small mine in the Mbeya region of Tanzania.

(Dar es Salaam) – Children as young as eight years of age are working in Tanzania’s small-scale gold mining industry, risking not only their health but also their lives, Human Rights Watch said in a report published today. The Tanzanian government is to curb child labour in small-scale mining, including informal, unlicensed mines. The World Bank and donor countries should also support these efforts.

The 96-page report “Toxic Toil: Child Labor and Mercury Exposure in Tanzania’s Small-Scale Gold Mines” documents how thousands of children in Tanzania, Africa’s fourth largest gold producer, work in small mines – in approved and unauthorised mines. They dig and drill deep, unstable shafts, work underground for up to 24 hours, transport heavy sacks and crush gold ore. The children are exposed to a high risk of injury from collapsing shafts and handling tools. In addition, contact with mercury, inhalation of dust and carrying heavy loads can cause long-term health problems. A 17-year-old boy who survived a mining accident told Human Rights Watch, “I thought I was dead, I was so scared.”

“Boys and girls in Tanzania are lured to the gold mines in hopes of a better life and find themselves in a dangerous, hopeless impasse,” says Janine Morna, Research Fellow in Human Rights Watch’s Children’s Rights Division. “The government and donor countries must ensure that these children go to school or education instead of working in the mines,” she said.

Many of the children who work in mining are orphans or other vulnerable children who lack the most basic needs. Girls are subjected to sexual harassment at the mine sites and are urged to prostitute themselves. Some girls become victims of sexual exploitation and can become infected with HIV or other sexually transmitted diseases.

Human Rights Watch visited eleven mining sites in Geita, Shinyanga and Mbeya districts and interviewed more than 200 people, including 61 children working in small gold mining. According to international agreements signed by Tanzania, the employment of children in mining is one of the worst forms of child labour.

“In Tanzania, there are strict laws, at least on paper, prohibiting child labour in mining, but the government has done far too little to enforce them,” Morna said. “Labour inspectors must regularly inspect licensed and unlicensed mines and ensure that employers who employ children are sanctioned”.

Working children, but also children who live near mine sites, are exposed to a high risk of mercury poisoning. Mercury attacks the central nervous system and can lead to lifelong disabilities in children as the heavy metal severely impairs their physical development. Mine workers, including children, mix mercury with the crushed raw ore and burn the resulting gold mercury amalgam to extract the gold. This exposes them to toxic mercury vapours. Often even small children are present during this process, which is sometimes carried out at home.

Most miners, adults and children alike, are not aware of the health risk. In addition, there is a lack of training and facilities for medical personnel and the necessary equipment to diagnose and treat mercury poisoning. Existing laws and initiatives to reduce the use of mercury have largely failed.

Tanzania was involved in the development of a new global agreement to reduce mercury emissions worldwide, agreed by more than 140 governments in January 2013. The Minamata Convention, named after the place in Japan where one of the most serious mercury disasters occurred half a century ago, is due to be signed near Minamata in October.

“Tanzania has actively promoted the establishment of the Minamata Convention,” Morna said. “To secure the future of its own people and its growing mining industry, the country must now lead the way and protect its children by getting them out of the mines and monitoring, testing and treating their exposure to mercury”.

The work in the mines also has an impact on school education. Children who work in mines sometimes stay away from school or drop out of school completely. Teachers reported to Human Rights Watch that attendance rates declined and school performance declined as soon as a new gold mine was opened nearby. In addition, many young people seek full-time employment, including in mining, because they have no access to secondary education or training.

A 15-year-old boy in the Geita district summed up the influence of mining on his life: “It is difficult to reconcile mining and schooling. I don’t have time for the tutoring [which takes place on weekends]. I think of the mine, am distracted … Once … I became ill [after I worked in the mine and then missed class]. My whole body hurt.”

The Tanzanian government should improve the protection of children and their access to secondary education and vocational training, Human Rights Watch said. The government and donor countries should provide financial and political support for the new action plan for vulnerable children and also include orphans from the mining regions in the Tanzania Social Action Fund’s support programme, which provides grants for disadvantaged population groups.

The World Bank and other mining sector donors should also support measures to end child labour in mining and reduce mercury exposure of children and adults, Human Rights Watch said. For example, they should help children working in unauthorised mines to switch to school and ensure that newly authorised mines do not resort to child labour. An ongoing $55 million World Bank project to support the mining sector does not directly address the problem of child labour.

The gold industry must ensure that it benefits neither directly nor indirectly from illegal child labour. Most of the gold traders surveyed by Human Rights Watch in Tanzania did not have appropriate measures in place to exclude gold mined by children from their supply chain.

Small traders usually buy the gold directly in the mines or in the mining towns and then sell it on to larger traders in Tanzania. Sometimes the gold passes through the hands of several intermediaries before reaching the exporters. According to the Tanzanian government, small-scale mining produced about 1.6 tons of gold worth 85 million US dollars in 2012.

The main buyers of gold from small-scale mining in Tanzania are the United Arab Emirates (UAE). The gold is also exported to Switzerland, South Africa, China and the United Kingdom.

“Companies – whether large or small, whether in Tanzania or elsewhere in the world – should avoid involvement with illegal child labour in their supply chain,” says Morna. “As buyers, gold traders have a great influence on their suppliers. They are supposed to use this influence to protect children, but also to protect consumers from buying gold obtained through child labour.