While air conditioners were once considered a luxury and were only installed in high-priced vehicles, they are now available as standard equipment. Of course, they can be ordered as optional equipment for any vehicle. Pleasant temperatures in the vehicle interior have long since ceased to be merely a luxury, and are now a key factor in ensuring the safety of the vehicle’s occupants. In the heat, the ability to concentrate while driving decreases considerably and the risk of accidents also increases considerably. To avoid this, a functioning air conditioner is advantageous. In order for it to work properly, it should be serviced at regular intervals.

How is an air conditioner constructed?

Similar to a refrigerator, the main component of the air conditioner is a refrigerant in a circuit. By changing its aggregate state, it absorbs heat on the one hand and releases it again at another point. The functions in detail:
An air-conditioning compressor first sucks in the gaseous refrigerant and compresses it, whereupon it heats up due to the high pressure. The heated, gaseous refrigerant is now fed to the condenser (cooler) via pipelines. This sits in the front of the vehicle and is usually equipped with additional fans to allow the refrigerant to cool down quickly. In the condenser, the refrigerant, which is still in gaseous form, is cooled and returns to a liquid state – although it is still under high pressure. In the downstream dryer, any water and foreign substances are filtered out of the refrigerant before it flows into the expansion valve. After passing through the narrow valve, the liquid in the evaporator can relax again, returning to its gaseous aggregate state.
The heat required for this process must be extracted from the air flowing past the evaporator. The cold air created by the heat exchange is now directed into the vehicle’s interior by the ventilation system to cool it down. The cycle starts again when the compressor sucks in the gaseous refrigerant again. However, the cool air is not fed directly into the passenger compartment, but must first pass through the passenger compartment filter. Its task is to remove pollutants and pollen from the air and to supply the interior with the purified air. 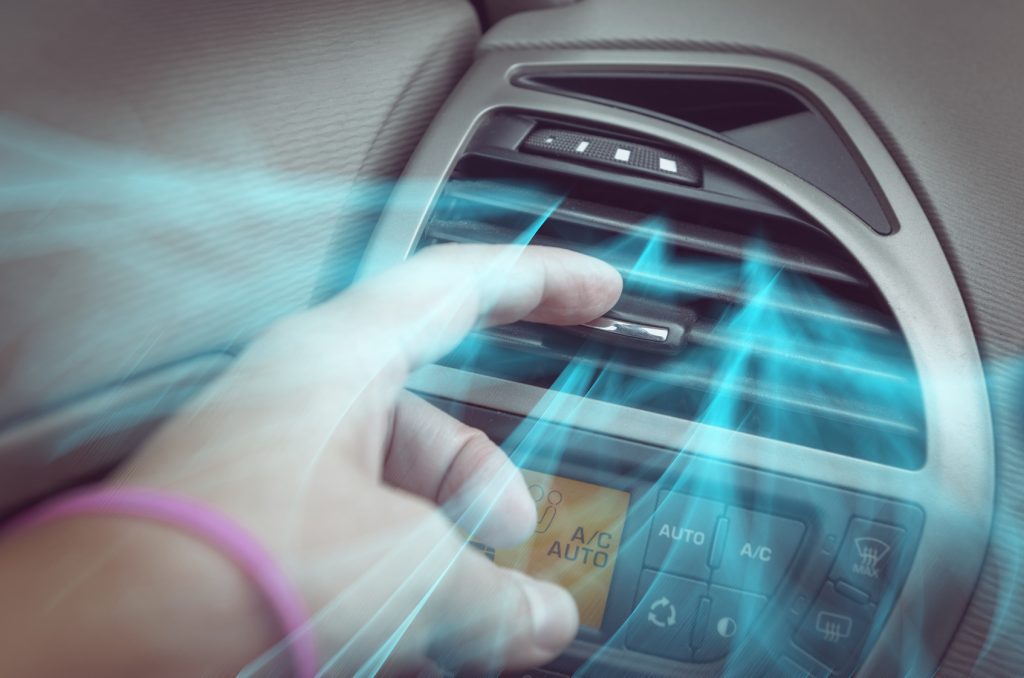 Components such as the compressor, the evaporator, or the expansion valve are checked during regular maintenance. But even seals or hoses are not maintenance-free: it is best to check them annually to see if there are any leaks. The air-conditioning compressor can be divided into different types, with the swash plate compressor being the most commonly used type. It consists of a housing with compressor parts and valves as well as a connection piece for the refrigerant lines. When the air conditioning system is switched on, a pulley with a magnetic coupling starts the compressor attached to the engine block via a V-belt.

What is used as a refrigerant?

The previously used tetrafluoroethane, abbreviated to r134a, had too high a global warming potential and so an EC directive was passed to use only refrigerants with a global warming potential of less than 150 as of 2011. This was the case for vehicles to which, from 1. type approval for operation in the EU was granted on January 1, 2011. Since January 1, 2017, vehicles with the refrigerant r134a may no longer be. vehicles with the refrigerant r134a may no longer be registered for the first time since January 1, 2017. But the new refrigerant r1234yf from the U.S. chemical company honeywell and dupont, which has been used since then, is also controversial because the highly flammable refrigerant can release highly toxic chemicals in engine fires.
Another alternative is the use of CO2 (carbon dioxide) as a refrigerant in air conditioning systems. The non-flammable, inexpensive gas damages the climate about 1.430 times less than the previously used refrigerant r134a. In addition, it does not form any decomposition products and, thanks to its high cooling capacity, is an ideal refrigerant for this application. CO2, also known as R774 refrigerant, can also be used to operate heat pumps. They can also help save additional energy in winter with cooling and heating concepts.
Many car manufacturers, such as Daimler and VW, are already using CO2 as a refrigerant in future vehicles. Mercedes-benz took on a pioneering role in the development of CO2 as a refrigerant. In europe, CO2 air-conditioning systems are being offered in the S and e classes as the first series-produced vehicles in the world. Since a fleet-wide use of CO2 air conditioning by the specific deadline of the EU directive on 1. In order to meet the January 2017 deadline, the automaker developed safe solutions for its vehicles that use the flammable refrigerant r1234yf. the development of CO2 air conditioning systems at daimler was triggered by a crash test in which a fire in the engine compartment caused the highly corrosive hydrofluoric acid to escape from the refrigerant r1234yf.

The VW Group is also planning to gradually equip its vehicle fleet with the new CO2 refrigerant. The VW subsidiary audi will install CO2 air conditioning systems in its vehicles as early as 2017, presumably first in the A8 luxury sedan. The use of CO2 as a refrigerant was discovered as early as 1988, but the development and conviction for the more climate-friendly refrigerant took until 2007, when the German oems and their suppliers, together with the VDA, agreed to use CO2 in the air-conditioning systems of their series-produced vehicles.

Of course, parking in the shade is a good way to prevent the car from heating up too much from the sun. But sometimes this is not possible. If the interior of the vehicle has become hot despite possible measures such as sunblinds or sunshades, it is advisable to open all doors before starting the journey in order to release a large part of the heat from the car. If the air conditioning is now switched on while driving, all windows should remain closed so that the air conditioning does not have to provide any unnecessary power. In general, the temperature in the passenger compartment should be set so that it is about 5 °C below the outside temperature and not below 22 °C for longer journeys, so that no colds occur. In recirculation mode, not only are the energy savings particularly high, but the pollen filter also does not clog as quickly and therefore needs to be replaced less frequently.
However, not switching on the air conditioning at all to save it is not an option! At least once a month, even in the winter months, the air conditioning system should be switched on for a few minutes. If this is not observed, the lubricant of the piston can no longer be distributed evenly. The components become leaky and the refrigerant can escape. This is not only harmful to the environment, but also expensive to repair. If the air conditioning system is not switched on for a long time – in winter, for example – mold and bacteria can grow on the evaporator. These are then distributed with the air in the interior when the system is switched on, which can be harmful to the health of the vehicle’s occupants.
A mold infestation in the air-conditioning system can be identified by the smell: if the air exhausted is stinky or smells foul and musty, this is a sure sign of mold. Since mold only forms in places where it is damp, it can be assumed that condensation has formed on the evaporator due to clogged drain valves or drain lines.
Residual moisture on the evaporator can be easily combated by turning off the air conditioner about 3 minutes before parking. The normal blower should thus be able to combat residual moisture. To subsequently disinfect the air conditioning system, you can visit a workshop or carry out the disinfection yourself. This can be done quite easily even by laymen. It is also important to change the cabin filter regularly to avoid the development of odors and bacteria. The change is usually made during the inspection; in the case of air-conditioning service, it is a fixed part of the examination.

How do I know that the air conditioning system is defective??

In addition to the aforementioned bad odor when the air conditioning system is used, a reduced cooling capacity is the main indication of a defect. Now be sure to check your air conditioner for possible leaks to prevent losing too much refrigerant. However, a reduced cooling capacity does not necessarily indicate a leak; the natural shrinkage of the refrigerant is normal over the course of the year. If there is not enough refrigerant in the circuit, it can be topped up in the workshop if necessary.

To ensure that your car’s air conditioning system works properly in the long term, it is important to have it serviced regularly. Here, all the important components of the system, such as the compressor, condenser, evaporator or expansion valve, as well as seals and hoses are inspected. Air-conditioning service should be carried out at least every two years, even if it is not specified in the service manual. Refilling and replacing the refrigerant are also part of the air conditioning service and should only be carried out by professionals with the appropriate equipment. The interior is also checked for odors in the workshop with the air conditioning switched on, so that disinfection can follow if necessary. By the way, regular maintenance of the air conditioning system not only protects the environment, but also your wallet in the long term, as it ensures that no expensive components such as the compressor or condenser suffer damage.