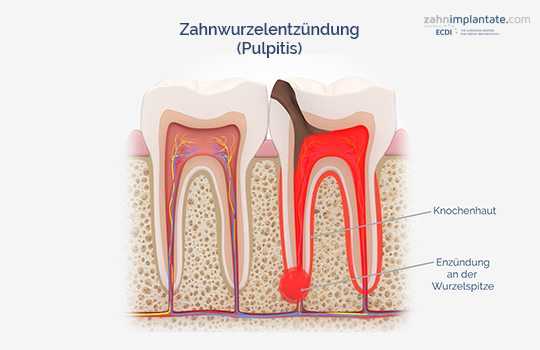 If toothache occurs, the trigger can be found on the tooth or inside it. Often the cause is an inflammation of the pulp. This so-called pulp is traversed by extremely fine nerve fibres that reach up to the jawbone.

If the pulp is inflamed, this is colloquially referred to as root inflammation. In medical terms, pulpitis is the inflammation of the dental pulp and takes place at the root canals or at the tip of the root.

If the nerve fibres in the pulp are irritated, this can sometimes cause severe pain. To treat them, a root canal treatment may be necessary or, if the pain persists, a so-called root tip resection.

Tooth pulp is the most sensitive area of the tooth – and inflammation is accordingly accompanied by severe, sometimes throbbing toothache. The affected tooth also becomes sensitive to pressure and reacts sensitively to hot and cold.

If the root inflammation expands to the jawbone and reaches the tissue surrounding the bone, a painful abscess can also develop, possibly accompanied by swelling and pain.

Tooth root inflammation: Immediately to the dentist in case of pain

It is therefore necessary that the dentist is consulted immediately in the event of exceptionally severe toothache. In particular, abscess formation in the jaw is associated with the risk of the spread of harmful bacteria in the body.

If the pain is initially throbbing and very severe and then disappears on its own, the dentist should nevertheless be consulted quickly, as there is a risk that the tooth has died as a result of inflammation of the tooth root.

What is root canal inflammation?

In order to understand exactly where root inflammation is located, it is worth knowing something about the structure of the tooth.

In addition, a tooth is composed of several layers: from the outside it is protected by the enamel, while one layer is deeper down the dentin and inside there is the pulp, medically called pulp.

The pulp consists of connective tissue, blood vessels and fine nerve fibres and extends inside the tooth through so-called root canals to the root apex, where the nerves merge into the jawbone.

There are several reasons for an inflammation of the pulp. In rare cases it can happen that such an inflammation starts due to trauma or grinding of the teeth. Also rare are wisdom teeth, which break through crookedly, the triggers for a tooth root inflammation.

Very often, however, the trigger for root inflammation is a caries infection, which has led to inflammation of the tooth root. The reason for this is the penetration of caries bacteria which have not been treated in time and which destroy the tooth unhindered.

In this process, the harmful germs migrate through the various layers of the tooth to the pulp. From here, the bacteria penetrate further until they reach the root tip. There the bacteria continue to spread and cause severe toothache.

Similarly, insufficiently treated or unnoticed periodontitis can pass to the root of the tooth and cause inflammation there.

If periodontitis is not brought under control by dental therapy and reaches the jawbone, it will disappear over time. At this stage, the gums retreat so much that the necks of the teeth are exposed and not only look longer, but can also become very sensitive to pain.

After you have visited your dentist, he will first examine the entire denture with special attention to the affected tooth. Since an externally invisible inflammation of the tooth roots can only be detected indirectly, it is important to inform your dentist in as much detail as possible about the nature of the complaints, their duration and the intensity of the toothache.

If it is suspected that the inflamed tooth has died, a test with an ice-cold substance or even a slight electrical stimulus can provide information, depending on whether the tooth pulp reacts to these stimuli.

An x-ray may also be used to get to the bottom of the root inflammation: For example, caries bacteria may have unnoticedly settled under a filling or a tooth crown and from there led to the inflammation of the dental pulp. It must also be determined whether these germs have already penetrated to the jawbone.

Modern dentistry makes it possible to clean the tiny root canals with special instruments, i.e. to rid them of the harmful germs they contain. Only if the root canals are free of bacteria can the inflammation be ruled out.

In addition, in the case of a bacterial infection, the canals are supplied with disinfectant inserts that stop the existing root inflammation. This procedure may also be necessary several times. The cleaned canals can then be sealed with a medical root filling paste.

After the treatment of tooth root inflammation

In addition, the necessary hole in the tooth is provisionally filled. If the tooth does not cause any more discomfort as a result of the root canal treatment, it can also be treated with a permanent filling. However, it is not uncommon for the inflammation to subside further after the treatment because the fine root canals are very branched and not always straight, which makes cleaning a technically challenging procedure.

If the symptoms persist despite the root canal treatment, a so-called root tip resection may be necessary. It is an important option for maintaining the tooth despite active inflammation as a result of root inflammation.

For this minor surgical procedure, which can be performed painlessly thanks to modern anaesthesia methods, the dentist must remove a piece of the root tip. In addition, it may be necessary to remove inflamed tissue and possibly a cyst if it has formed in the bone as a result of root inflammation.