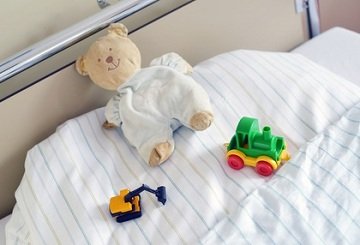 Due to language problems of our 3-year-old daughter, we were presented in the CHC (Comprehensive Hearing Center) of the University Clinic in Würzburg in the past few months, since our son is already being treated for hearing loss there.

In fact, it emerged from studies that the language problems were very likely to be a concomitant symptom of tympanic effusions. These can lead to problems of language development, especially if they occur frequently in children, because they reduce hearing.

Because timpani effusions occur very rarely in children in summer, the doctors suspected that they had been around for a long time and there may be a problem with the ear canals. Hearing tests and a pressure measurement had also shown that there was a negative pressure in the inner ear, which also indicated a disturbance in the ventilation of the middle ear.

Since the doctors often see these symptoms with enlarged throat tonsils (colloquially also called polyps), the doctor asked us some typical questions:

In the past, we had often noticed snoring and language problems in our child, but less pain in the ears or breathing in the mouth.

As a result, an operation appointment for an operation was agreed and the giving of nasal drops was recommended, in the hope that the tympanic effusion and the negative pressure in the ear might give themselves. On the day of the operation, one would then decide whether an operation with removal of the tonsil tonsil, paracentesis and insertion of tympanic tubes into the eardrum would be necessary for this procedure.

The drops prescribed by the doctor were then administered over a few weeks until the appointment for the operation was due.

Our experience with the surgery

In fact, during the vacation weeks in summery Croatia, the drummings disappeared by themselves with the drops. Due to the strong language problems and the suspicion of enlarged tonsils, people were still advised to go to the surgery. However, the tympanic tubes should not be placed in the procedure. You can only see whether the tonsils are enlarged under anesthesia. In the best case for the child, one would see under anesthesia that there was no need for action on the tonsils. In this respect, the operation was primarily intended to carry out a comprehensive examination of the pharynx and then take further steps based on the findings. Well.

The day before the procedure, we (mother and daughter) were admitted to the hospital. All preliminary talks and examinations by various doctors at the university clinic were carried out on the previous day. The preliminary anesthesia interview and a blood test also took place on this day. The following day, our child should be the first patient in the ENT department of the ENT clinic.

We started the day of the operation very relaxed. Shortly before the appointment, the little girl got two plasters on the palms of the hands, under which an ointment should ensure in the next few minutes to numb the skin for later access (small remaining tube in the vein). She was then pushed into the operating theater together with the bed in her pajamas and fresh linen.

In the operating theater, parents have to put on a throw to accompany the child. By giving a sedative, the children are usually soothed and tired that they accept the access without any problems and can be relaxed on a couch by the anesthesiologist in the operating room.

Unfortunately, we have not had a good experience from here. Unlike most children, our daughter resisted sleep so intimately before the procedure, that even giving another dose of sedative and combination medication did not cause her to fall asleep or be separated from her mother. It was almost impossible to put her on the operating table. Because a lot of time passed during the preparations for the operation (i.e. the administration of new remedies), the skin surface of the hands was unfortunately no longer 100% anesthetized. So it was a little difficult to set an entrance and a little painful for the little one. In addition, due to the very small veins, it ultimately did not work at all. Unlike usual, all sedative medications did not ensure that our daughter could be easily pushed into the operating room for the procedure. Instead, she was then brought into the operating room with a few small tears without access by the anesthetist. Not the optimal process for both the medical team and us. In the operating room, however, she immediately fell asleep through an anesthetic mask.

Course of the operation

The operation went very well. In fact, the tonsils (polyps) were enlarged and were therefore removed or removed by the doctors. The eardrums were cut open, the residual fluid was sucked out behind it and the ear was cleaned.

Our daughter slept a little longer than usual after the procedure because she had been given a lot of sedatives before the operation. But she tolerated them very well and was already our old child after only a few minutes. Neither particularly sleepy nor queasy. She also had no pain from taking medication. Very relieving for us as parents: The sedatives cause a temporary loss of memory, which is why our daughter had no memories after entering the preparation rooms. She was convinced that an operation had not taken place.

Healing after the operation of the tonsils

The healing went very well with the removal of the tonsils little Pain. Eating and drinking was a bit painful at first, which is why our daughter didn’t drink and eat very much. Therefore, on the third day, she received an infusion through the access that was finally placed on the foot. Unfortunately, this was a bit of a hindrance because she could not wear shoes and a lot had to be worn by us.

By administering pain relievers through suppositories or analgesic juice, she was able to swallow almost painlessly and without problems on the third day. She should take the medication not only because of the pain, but also because of the antipyretic and anti-inflammatory properties.

Access was only removed by the doctor for discharge in order to be able to help the child quickly with medication in the event of complications.

Originally, only one additional night was planned, including the first night before the operation. Since our daughter unfortunately vomited as a result of the anesthetic shortly before the doctor’s visit, the throat was somewhat irritated during the examination. As a precautionary measure, the doctor therefore suggested that we stay another night (three nights in total) in order not to take any risks.

In retrospect, we learned that tonsils are often treated on an outpatient basis. The fact that we had to stay in hospital for a few nights either had to do with the fact that the clinic is particularly careful or such large clinics simply want to have their beds fully occupied … who knows! The fact that the children really take care of themselves and are permanently monitored is certainly an advantage when they are in hospital. Our daughter thought the full attention of mom for 2 nights was definitely not bad.

Risks / possible complications after the operation

The greatest risk after such an operation, removal of the tonsils, is one rebleeding. Because, as the name suggests, it takes place in the throat consists the risk that the parents will not notice the bleeding and the child will bleed to death unseen. Therefore, our daughter was not allowed to go to kindergarten for two weeks, should not exert herself physically and should always be under observation.

The incisions in the eardrum were not very important in addition to the operation of the tonsils. In contrast to the placement of tympanic tubes, the only thing left to do was to wait. A treatment of the ears on our part was not necessary. The little girl was in no pain. The cuts themselves healed completely within 10 days and so we were able to bathe again after a short time without taking care that no water gets into our ears.

The throat also healed wonderful. The only thing you could really notice was bad breath. Only three days after the discharge, pain relievers were no longer necessary, she was able to eat well and was not restricted except for the involuntary nursery break.

CONCLUSION after removal of the tonsils (polyps)

Unfortunately, the removal of the pharynx was not 100 percent successful. The middle ear was still not adequately ventilated and, due to repeated tympanic effusions, tympanic tubes had to be placed despite the pharyngeal tonsil surgery.

It is understandable that one wanted to try to bypass the tympanic tubes first, but it would have been nice afterwards if our little one had already got them during the operation of the tonsils and not to the hospital again (this time only on an outpatient basis) and therefore also under anesthesia should have been laid.

However, the removal of the pharyngeal tonsil itself was basically not a drama, the healing was good and, in the long term, certainly a correct step. You should not be afraid of the operation, as it is carried out daily without complications anywhere in Germany.