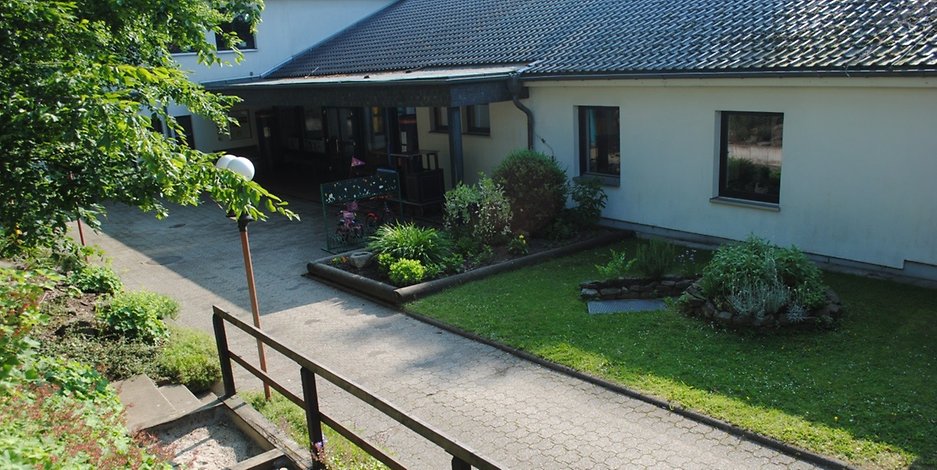 1974 – as Walter Scheel Federal President, Helmut Schmidt Chancellor of the Federal Republic of Germany, Hans Otto Bäumer District President of the State of North Rhine-Westphalia, Ulrich Müller-Frank Mayor of the City of Bensberg, Paul VI. Pope, Joseph Cardinal Höffner Archbishop of Cologne, Monsigore Leo Meiß District Deputy of the RBK and Pastor Heinrich Pohl Pastor of Dürscheid, Dürscheid still belonged to the city of Bensberg, the Montessori Children’s House St. Nikolaus in Dürscheid became part of the day care center for 90 children in the Three to six years old, who were cared for in three groups.

In the meantime, the children of these first children have visited our house or are still doing so.

In 1957, after the Sputnik shock, the Americans invested more money in education. It could not be that democracy and free market economy had been technologically overtaken by the communist and planned economy-ruled Soviet Union. A fundamental reform of the education system was sought in order not to be left behind by the Soviet Union in space.

Particular attention was paid on the Natural sciences, as there were three times more engineers in the Soviet Union than in the United States. Money has now been invested in education, especially in the less educated classes and in early childhood education. Preschools were created. John F. Kennedy implemented the idea of ​​educational television, the birth of Sesame Street.
Western Europe now also invested more money in the education of its children. Kindergartens for children from three to six years of age were increasingly opened in the FRG, first in the cities and then in rural areas. So also in Dürscheid. Pastor Pohl founded the "Nikolausverein".

Money was also invested in scientific model tests. Where can five-year-olds get better education if they go to school at the age of five or in the mixed-age group of a kindergarten. The decision was in favor of the kindergartens.

After the fall of the wall (1990), the establishment of crèche places and the legal claim for children from 2 years of age to a crèche place began, especially in the old federal states. As a result, the offer structure in our house also changed. Now 62 children are currently visiting our house, most of them from 7:00 a.m. to 4:00 p.m., some to 2:00 p.m. and only three have a place in the children’s home until 12:00 p.m. The youngest (0.6 to 3 years) visit the crèche group and the children from three to six years the two children’s house groups. That means for our educational team always new challenges.

It is still important that our pedagogical specialists complete a two-year part-time training for the Montessori diploma. Our children’s home is certified by the German Montessori Association and nationwide training center for Montessori teachers and educators.

In the crèche group, the educators working there have a further qualification. A certificate of early education based on Montessori and Pikler pedagogy "Mindful accompaniment and education in the first years of life."

According to Montessori and Pikler, all learning takes place through movement. Self-activity and self-determined movement development support personal development. We support this with the practical exercises and the Pikler movement materials.

Training of the movement continues with the older children. Once in our natural and large outdoor area and with the Hengstenberg materials. Elfriede Hengstenberg (1892-1992) was a gymnastics teacher in Berlin. It was her concern that children can discover and develop their movement skills. We would like to thank the sponsoring association of our children’s home, which provided us with 1,500 euros in summer for the purchase of extension movement material.

Singing and playing music is still part of our everyday life in a children’s home. Mr. Norbert Kuschel and his musical education after Carl Orff have become an integral part of our company.

For five years we have had a painting site in Arno Stern (we have about that reported in the parish letter). The realization was only possible with the support of the support association and parents. We would like to express our thanks to our parents’ council, who sponsors a clothing exchange twice a year, the proceeds of which make such purchases possible. In addition to the painting location, there are many other projects for art and visits to museums and churches.

Maria Montessori says that language and religion are the hallmarks of people. Religious education in our home is based on the Montessori approach. But many new forms have been added. Religious education is a culture of storytelling in many forms with Egli figures, materials according to Franz Kett and Godly-Play. Colleagues have additional qualifications here. 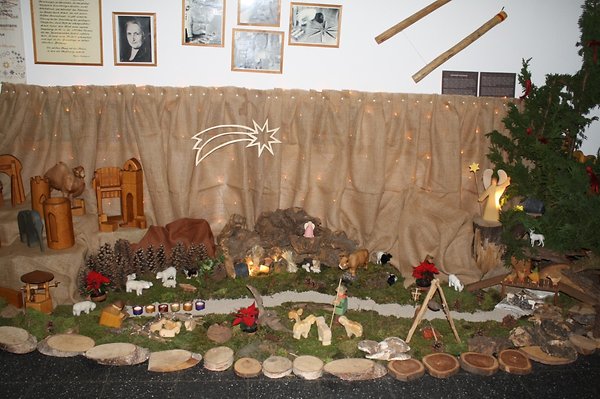 In 2019 we celebrate 100 years of Bauhaus. For this our sponsoring association gave us a birthday present. "The Bauhaus game" This game was designed in 1923 by Alma Siedhoff-Buscher (1899-1944). Buscher studied at the Reimann Art School in Berlin from 1917-1920 and went to the Bauhaus in Weimar in 1922. She is trained in sculpture and by Kandinsky and Klee in color theory.

In 1923 she designed a children’s room with functional furniture for the “Haus am Horn”. In addition, the "ship building game", which is produced until 1933. In 1926, she married Bauhäusler Werner Siedhoff. Walter Gropius refuses to keep her at the Bauhaus after the birth of her first child, and Siedhoff-Buscher gives up her job as a designer. In 1944 she died in a bomb attack. Later she is spoken of repeatedly as a Bauhaus designer. In the television film: "Lotto am Bauhaus" (2019) you can learn a lot about her work. 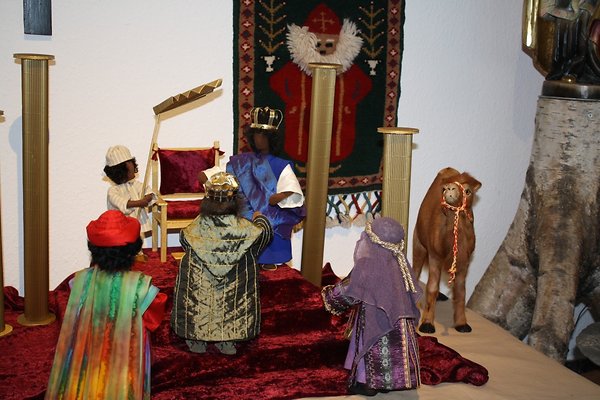 The three St. Kings at Herod

“Our toy (Bauhaus): The shape – simple – confusingly clear and determined – the child creates diversity and charms by assembling and building. So – a constant development. ”This is how Alma Siedhoff-Buscher described her designs and the associated educational approach in 1925.

With the 22 simple colored pieces, no particular model should be built. Instead, the child is encouraged to invent something new, hence the name. A ship that can also be a mountain and valley railway, a gate, an animal and much more. The children’s furniture from Siedhoff-Buscher also shows this reform pedagogical approach.

Your children’s play cabinet consists of several box-shaped elements. They can be combined in different ways and are suitable for any purpose in the game – whether as a seat, table, shelf, box or rollable trolley. The Bauhaus game goes well with Maria Montessori’s reform pedagogy and thus into our children’s home. It also takes up the idea of ​​the great educator Friederich Fröbel: "Let the children build."

Last but not least, you can find the idea of ​​free building in our movement materials according to Emmi Pikler and Elfriede Hengstenberg. The Bauhaus game is offered today by the company "naef" (Switzerland). By the way, there are many interesting games from this company in our children’s house. 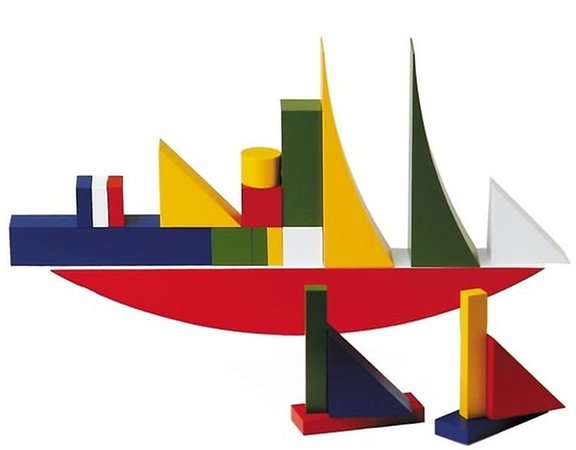 The guiding principle of our house has been hanging in the hall of our children’s house since October 1974, clearly visible to every visitor:
The children’s home wants to create its own environment for the child, which is geared towards its growing strength and entrepreneurial spirit. It creates an opportunity to overcome inhibitions that could disadvantage intellectual growth, awaken joy in work and satisfy the child’s interest through work that corresponds to his or her mental powers. There is real guidance in developing mental abilities through help in self-chosen work, offers the child his social environment in which he can experience the moral norms that living together demands. It learns to use its freedom and thus lays the foundation for its ethical education.
Such a house is a house in which hope lives.
Maria Montessori 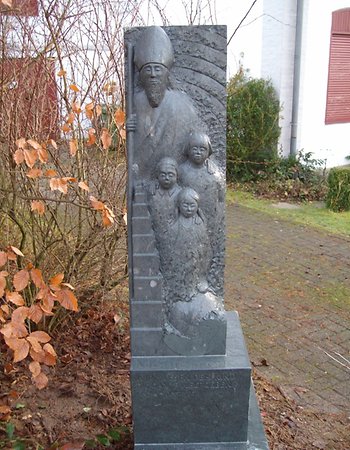 We look forward to accompanying children in their development every day.
May the children’s home be a good place for children for many years to come, under God’s blessing and the protection of his namesake and the friend of the children, Saint Nicholas.