We use cookies to offer you a better user experience. By using our services, you consent to our use of cookies. Further information 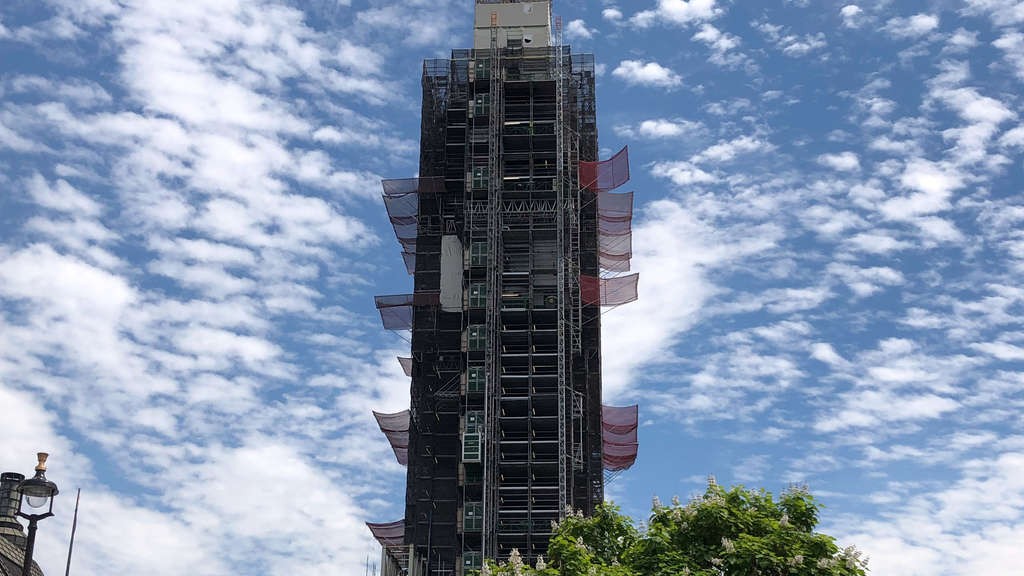 The ravages of time gnaw at the clock tower

160 years ago, the Big Ben bell sounded in London for the first time – however, it is currently silent.

Thames and Buckingham Palace can be seen far below, in the distance the rolling hills of the surrounding area of ​​London. It is narrow at almost 100 meters on the Big Ben landmark. Few workers can work in the tangle of scaffolding and ladders for years of renovation at the same time. Height and claustrophobia are out of place here.

160 years ago, on July 11, 1859, the big bell – the Big Ben – rang next to the Westminster Parliament. The British also affectionately call the whole tower that. The landmark, which, to the disappointment of tourists, is barely recognizable behind the scaffolding and plastic sheeting, is now named after the British Queen: it is now officially called the Elizabeth Tower.

The ravages of time have gnawed at the landmark. But half of the elaborate renovation has already been done, project manager Nicholas Sturge said during a tour. "The workers have to be very careful." Experts disassemble piece by piece, process the parts and then reassemble them into a large whole. If everything goes well, according to Sturge, the outer scaffolding will be dismantled from the end of 2020. The interior of the tower would then be completely renovated by 2021.

The dimensions of the project are enormous: the four clock faces on the clock each have a diameter of seven meters. Each clock face consists of 324 glass panes. "They are all mouth-blown and not transparent," explained Robert Christ from the Lamberts glassworks in Waldsassen. The company in the Upper Palatinate region in northern Bavaria produces the new discs for Big Ben.

The cast iron roof and the so-called Ayrton light are also overhauled. The lantern-like structure only lights up in the Elizabeth Tower when Parliament meets after sunset.

The ringing is expected to be suspended until 2021, because the clockwork must also be overhauled. Otherwise the workers would otherwise get hearing damage during construction. Experts have already compared the volume of 120 decibels in the tower to police sirens.

Speaking of the police: there was even a small prison for members of parliament in the tower. Most recently, a member of parliament came in in 1880 who did not want to take the religious oath.

Many Britons are annoyed that they have to do without the blows of the Big Ben and the other four bells for a long time because of the renovation. There was even a lot of argument in Parliament; Prime Minister Theresa May also didn’t like the long suspension of the ringing. The leader of the opposition Labor party, Jeremy Corbyn, did not consider the silence of the bells to be a "national disaster".

The almost 14-ton Big Ben usually strikes every hour, the smaller bells every quarter of an hour. The ringing in the construction phase can only be heard on special occasions – such as New Year’s Eve. The Big Ben was probably named after the British builder and politician Sir Benjamin "Ben" Hall (1802-1867). Another theory says that the huge bell was named after the heavyweight boxer Ben Caunt.

The clockwork of the landmark is considered extremely precise. Four mechanics, the “keepers of the big clock”, are on duty to ensure that the timing continues to work so precisely. One of them is Steve Jaggs, for whom the clock and the big bell of Big Ben are "representatives of our democracy and our capital". Dragons and unicorns made of sandstone have now been spruced up. A dial shines again in white, blue and gold. "Above all, the building was affected by air pollution," said leading architect Adam Watrobski. The materials were attacked by pollutants. Thanks to environmental protection measures, this will no longer be such a big problem in the future – but Watrobski fears that another could be added. "We just don’t know how global warming affects the building."

The condition of the Big Ben is no exception in London. This is how large parts of the parliament are renewed. Most of the approximately 4000 windows in the approximately 1100 rooms no longer close properly. It crumbles from the walls, the water shoots through the ceiling and the old heating system is better never turned off until you can’t get it in winter. The nearby Buckingham Palace is also dilapidated. There were even times when staff caught buckets of water to save artwork. (AP)