The AOK in numbers 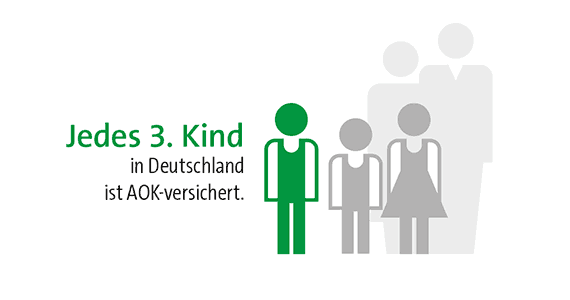 26.29 million people cared for the AOK community in December 2017 – almost a third of the population in Germany. Every third child in Germany is insured with the AOK. The market share of health insurance after insured is 36.2 percent. Their concerns take care of more than 61,500 employees in the 1,245 branches nationwide.

In an annually updated version, the AOK Federal Association provides an overview of the basic data and financial development in the statutory health insurance (SHI) and in the AOK community. The information is broken down into the main expenditure areas. They are complemented by international comparative data.

The concentration of the AOK community on good quality and high efficiency in the supply pays off. For years, the AOKs have recorded a below-average increase in benefit expenditure. In 2017, the health fund invested a total of 82.2 billion euros in the care of its insured. That was almost 28 percent more than in 2011. GKV-wide benefit expenditure, however, increased more. Between 2011 and 2017, they increased by more than 29 percent and were last at 217.8 billion euros. To illustrate: Alone in 2017, the AOKs have spent about 1.2 billion euros less than would have been the case for a GKV-average spending development.

One third of the expenditures for inpatient and outpatient care

The AOK’s hospital health care expenses increased by almost one-fifth between 2011 and 2017, from € 24.0 billion to € 29.1 billion. The cost of outpatient medical services increased by almost a third in the same period, and most recently stood at 14.3 billion euros. Only € 0.4 billion less was spent by the AOK in 2017 for medications prescribed by general practitioners. That’s 22 percent more than in 2011.

In total, the costs for inpatient and outpatient medical treatments, including prescribed medicines, account for about one third of the total health insurance expenditure.

For dental treatment including dentures, the AOK spends six percent of the total expenses. The costs in this area fell even slightly between 2011 and 2017 by 0.1 billion euros or 2.6 percent from 3.8 to 3.7 billion euros.

The clinics in Germany treat more and more patients. From 2011 to 2017, the number of cases increased from 18.3 million to 19.4 million. Nevertheless, nationwide occupancy rates remain below the targeted 85 percent mark.

Seven out of ten partial indications without added benefit

In over 70 percent of subindications that have undergone a benefit assessment, no added benefit has been identified. More than 430 partial indications have been examined by the Federal Joint Committee (GBA).