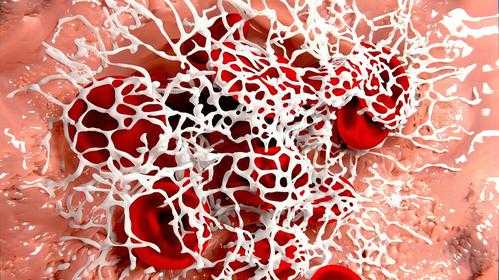 Because thrombocytopenia disturbs blood clotting, there are smaller and larger hemorrhages throughout the body. The symptoms depend on how low the platelets are and how slow the blood clotting is.

The first signs are often small skin bleeding in the subcutaneous tissue. They are also called petechiae. Furthermore, one finds more bruises, hematomas. Patients with moderately low platelets often bleed spontaneously from the nose and gums. This is a much clearer symptom than increased occurrence of bruises after bumping.

More dangerous symptoms include frequent mucosal bleeding and internal bleeding, such as bleeding in the gastrointestinal tract. This can often only be recognized by finding blood in the stool. Also very dangerous are brain bleeding, which can have very bad, lifelong consequences.

Generally, there are three main causes. Either too few thrombocytes are formed in the bone marrow, the platelets formed are not properly distributed or attacked by the immune system or too many platelets are broken down.

Too few platelets are formed:

Vitamin B12 or folic acid are the substrate for platelet formation in the bone marrow. So if vitamin B12 or folic acid is missing, too few platelets are produced. One in every twenty women in the last trimester of pregnancy finds that the platelets are too low. But this normalises after birth and is no danger to mother and child. Blood-thinning therapies can also trigger the destruction of platelets, such as heparin therapy. Heavy bleeding can cause too many platelets to be consumed and therefore not enough in the blood. The formation of platelets in the bone marrow may also be disturbed in the case of leukemia (blood cancer). The blood contains three different cell types, the red blood cells (erythrocytes), the white blood cells (leukocytes) and the platelets. In leukemia, many immature leukocytes are formed at the expense of the erythrocytes and platelets.

The formed platelets are not properly distributed or attacked by the immune system:

Too many platelets are broken down:

The platelets are mainly filtered out and broken down in the spleen. A too large or overactive spleen (Figure 2) can therefore lead to excessive degradation. In addition, the platelets are also degraded in the liver and lungs. In the case of liver cirrhosis, there is a build-up of blood back into the spleen, whereupon it enlarges and thus more platelets are broken down. Thus, cirrhosis of the liver can also lead to thrombocytopenia. 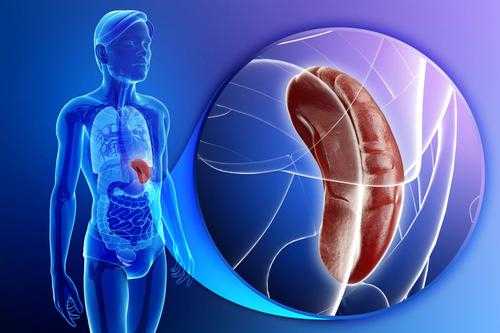 One should go to the doctor if the above symptoms occur. Symptoms, such as bruising, make it more difficult to get a sound. But you should definitely pay attention to common bruises and if these or nosebleeds increase and repetitive, you should urgently see a doctor. In case of sepsis, an emergency doctor must be called immediately to avoid major complications.

The treatment depends very much on the particular cause. In general, bleeding must be stopped with medication. Then the bleeding factors should be reduced and the number of platelets increased.

If an acute thrombocytopenia, it does not need to be treated. It is usually a result of an infection and usually normalizes itself again. A drug treatment is possible. The drug eltrombopag stimulates the production of precursor cells of platelets. This should stimulate the formation of platelets and thus increase the number of platelets in the blood.

In an autoimmune disease, immunosuppressants such as corticosteroids or intravenous gamma globulins may be used. Thus, the platelets should be attacked less by the immune system. If the thrombocytopenia has been triggered by medication, it must be discontinued immediately in consultation with the doctor.

For chronic symptoms, platelet transfusion may also be used. Furthermore, the spleen can also be removed. Generally, however, organs are not often removed as this is a major intervention that may be accompanied by complications and / or infections.