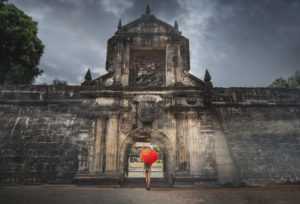 The history of the Philippines in recent centuries: A stolen paradise

The time as a Spanish colony testify today many structures, such. the old city of Intramouros in the heart of Manila.

1898: Spain declares war on the USA. The US wants to control Spain’s remaining colonies and gain access to the Asian market, especially through the Philippines. Finally, the Philippines will be sold to the US for $ 20 million.
The Filipinos themselves resist the recent takeover and in the following years a bloody war reigns. The Philippine people are genocidal, similar to the famous Indian wars, perpetrated by the United States. Inhumane atrocities are committed and about 1 million civilians slaughtered. 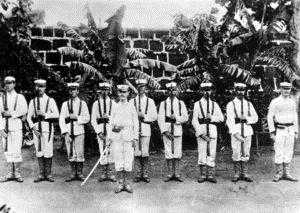 Soldiers hoist the first American flag in the Philippines

During the Second World War, after the attack on Pearl Harbor in 1941, the Japanese occupy temporarily the Philippines.
1949: The country is officially released into the long-awaited independence, but with the condition of another 28 years of economic dependence on the United States. 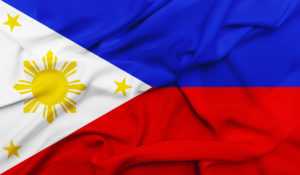 Philippine flag since independence in 1949

1965: Ferdinand Marcos is the new president of the republic. After a few years he mutates into a cruel dictator, who gets rid of his opponents, who can hardly be surpassed in brutality and who bleeds the country to the last straw.
1986: Marcos flees with his wife in a popular uprising from the Malacanang Palace. With luggage from 15 suitcases full of jewels and 22 wooden boxes filled with fresh banknotes, they are brought by helicopter to Honolulu by friends of the American government. The masses of people storming the Marcos Palace find countless accumulated riches, including the now legendary 2700 pairs of extravagant designer shoes by Imelda Marcos. In a country that is one of the poorest in the world. 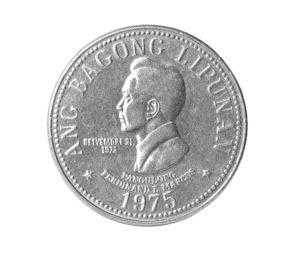 Coin of the new republic with Marcos`Portrait

Since then, the Philippines have been a presidential republic and democracy. However, corruption is still prevalent today among all levels of government and the Philippines, who have never properly recovered, are still a third world country.

According to a study by Global Financial Integrity, since 1965 the Philippines has lost about $ 410 trillion! to corrupt politicians. 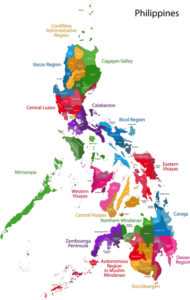 Map of the Philippines

Since 2016, President Duterte is now in office, promising to do everything differently. Internationally harshly criticized for its harsh methods and loose-spoken, it is almost adored by the majority of Filipinos. Excerpt from the national anthem was written in 1898:

Chosen country,
Cradle of brave heroes,
the conquerors
you will never surrender.

Through your seas and mountains,
through your air and your blue sky,
blow magnificent poems
and the song of the beloved freedom.