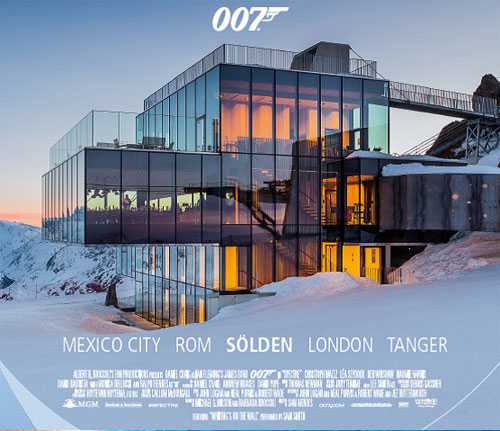 For the new blockbuster “Specter”, the coolest film scenes were shot in the snow in Sölden … Sölden, the top ski destination in the Tyrolean Ötztal, combines sport, action and enjoyment with snow guarantee from October to May. Even James Bond was shaken and moved …

Mexico City – Rome – Solden – London – Tangier: On a secret mission, Daniel Craig, aka 007, hunts around the globe … And director Sam Mendes has selected the hotspot of the Alps as the “fantastic place” for the shooting in the snow for the latest Bond film “Specter”. Bond and the mountains – 007 back in the snow – that’s just tradition. The world-famous ski resort with its three 3,000-meter ski mountains, 145 kilometers of pistes and top facilities is perfect for that. Around the turn of the year 2014/15, the stars and the 500-strong film crew had lodged in Sölden. On his return to the Alps, the dashing secret agent was allowed to complete action-packed chases on Sölden’s slopes and the glacier road with the highest road tunnel in Europe. At Daniel Craig’s side (and against him) actor greats such as Ben Whishaw, Léa Seydoux or Dave Bautista fought in the Tyrolean winter. Producer Barbara Broccoli was pleased with the “5-star infrastructure from the valley to 3,000 meters”, which she and her team found before and during the filming.

Incidentally, the home base for Daniel Craig and his crew was the Bergland Hotel Sölden – a design hotel. We suspect that he turned his rounds here in the indoor pool to relax from the shoot, skiing was not allowed because of the risk of injury. His wife Rachel Weisz was on skis all day. The ski instructors have understandably torn themselves around this prominent ski student, as we were told …
The “ice Q” at the summit of the Gaislachkogl as a 007 location presents itself as futuristic and spectacular. Opened in 2013, the gourmet restaurant is considered a design jewel in the Alpine region due to its special location at 3,048 m above sea level on the summit of the Gaislachkogl and purist architecture. The glass facade provides a view of the breathtaking scenery of the Ötztal Alps. “It’s surreal, looks like a painting,” marveled actor-star Dave Bautista when he first arrived at the summit. “Spectrekular”, so to speak. The cube of the “ice Q” plays a central role in the film. However, not as a gourmet temple, but as a futuristic clinic, in the Bond opponent Christoph Waltz evil in the guilty … The “ice Q” was the way for the interior shots orginalgetreu copied in the Pinewood Studios in London.

Also on Gaislachkogl was invited to the first photo call for “Specter”. The first, official “Behind the Scenes” video has been viewed several million times and shows impressive impressions of the shooting at over 3,000m above sea level. Bond Girl Léa Seydoux announces right at the beginning: “We are in Austria in a beautyful place, called Sölden …”
The 24th “Bond” has it all … We were at the premiere in Hamburg Cinemaxx and are thrilled with great locations, mistaken chases and beautiful, but unfortunately rotten, Aston Martins. In the end, as always, we are “totaly happy” when Daniel Graig, the cool Englishman, aka 007, wins against the evil … Our men are at odds about the Bond Girls and Ben (14) clearly finds Monica Bellucci too old , From his perspective, also quite understandable … The “ice Q” we all want to look at all very soon in real and especially the ski slopes around the Big 3, the three thousanders Söldens. We all agree.