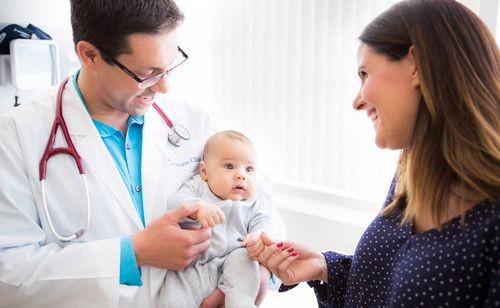 If children get sick, a fever is often involved. As a symptom of the disease alone, however, it is not very meaningful, usually in conjunction with other symptoms it is an expression of a specific disease. The following overview should help you to quickly get the correct diagnosis.

The normal body temperature of a child is between 36.1 and 37.8 ° C, but varies depending on the time of day (the highest level is reached at around 6:00 p.m., the lowest at around 4:00 a.m.). If the body temperature is increased, this can have other mundane reasons in addition to illnesses, such as romping, being too warm or similar.

The tendency to fever is very different in children, some get higher temperatures even with mild colds, others only have a slight fever even with severe flu. In principle, fever is a signal that the body is dealing with a disease, which is why you should not immediately take an antipyretic if your child is at an elevated temperature. The situation is different if the fever is very high, but also if there is chills or febrile seizures that have already gone through; then an antipyretic drug is helpful and necessary.

Important: Always give an agent (suppository or juice) that contains the active ingredient paracetamol or ibuprofen. Never acetylsalicylic acid, which is often used in adults, as this ingredient can trigger the rare but very dangerous Reye syndrome in children (destruction of tissue cells in the brain and liver).

How to measure fever

Children up to the age of six are usually measured rectally, i.e. in the anus. Grease the thermometer a little so that it slides more easily. The measurement should take about three minutes.

In infants, it makes sense to hold both feet with one hand and raise the legs. You can hold the thermometer with the other hand. You can lay toddlers over your thighs with your stomach.

For older children you can also measure under the armpit. Note that the temperature measured in the armpit is about one degree lower than the body’s core temperature.

Alternatively, you can measure fever in the mouth; the thermometer should then be placed under the child’s tongue. The mouth is closed, the measurement takes about three minutes. This method does not make sense for a stuffy nose.

Newer fever monitors can also be placed briefly on the ear or temple and beep when they are finished, but are inaccurate in babies.

When is it a fever?

A child starts to have a fever, though

Slight increases in temperature can be caused by running around, clothing that is too warm, a hot bath or hot weather. If this could be the case, check the temperature again after a few minutes.

Fever is a symptom and not a disease. Fever is a normal response to infections and plays a role in fighting them. Fever arises from processes in the immune system. Fever up to 40 ° C, which every child may occasionally have, is not harmful. It is often caused by a viral infection, but sometimes by a bacterial infection.

Whether teething leads to fever is a controversial issue. Most fevers from viral infections last two to three days, sometimes a little longer. Often the fever alone is not a good measure of the severity of an illness. How your child behaves and how it reacts is more important. Fever below 41.7 ° C does not cause any damage. Although all children have a fever from time to time, only a few occasionally experience a febrile seizure. This is usually harmless if it only lasts a short time and a child never has seizures outside of fever

Treat a feverish child at home

Make sure you wear light clothing when your child is feverish. Give him a warm blanket if it shivers, shakes, or shakes. Provide cool drinks, often and in small portions.

Note that fever can help your child survive the infection. Use an antipyretic drug if the temperature rises above 39 ° C, especially at night and when your child has a fever. Children over the age of three months can easily be given one of the common antipyretic preparations, as suppositories or as juice (Mexalen, Parkemed, from six months Nureflex).

Do not use aspirin or other salicylic preparations. Give the medication correctly according to the dose given for age, if necessary every four to six hours. A maximum of one hour after administration, the medication lowers the fever – often with a sweating – it normalizes the temperature temporarily and possibly not completely.

These old methods can be used when your child feels hot and has warm legs, but not during chills.

The cooling bath should not be cold, but lukewarm. It lowers the temperature by dissipating the heat into the water or by evaporative cooling. If you take the child out of the bath, do not dry them immediately.

Your child is younger than three months

it is difficult to wake up

it has a febrile seizure

it breathes heavily or noisily, which does not improve after you have cleared its nose of mucus

cannot swallow and drink or lose saliva through the mouth

Your child looks bad or you don’t like it otherwise

Within 24 hours, if your child is younger than six months (except shortly after a vaccination)

Burning or pain when passing urine or the urine smells "sharp"