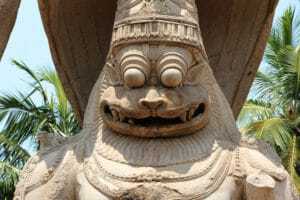 Hampi is beautiful. Hampi annoying too! Both extremes are close to each other here. In this article, I’ll show you what you‘re getting into, what to explore in the area, and why the positive side outweighs it.

Granted, I did not have a clear picture of Hampi when it took us here. Only on the edge did I notice that it attracts many backpackers here. So Hampi could not be so bad.

The beautiful side of Hampi

Hampi is a small village with about 600 inhabitants. Right on the first day I got the old palaces impressed that we drove off with a rickshaw. It is hard to imagine how before over 500 years such huge facilities could be built. The Portuguese merchant Domingo Paes Hampi, which was then called Vijayanagars, in 1503 with the Size of Rome compared. Since only the ruins have large proportions, I can well imagine that this description is not exaggerated!

The second day has everything in the shade. On this day we hiked along the river in the northeast of Hampi. How beautiful it was in Hampi, shows best our video:

The most important places in Hampi

There are countless ruins and temples in and around Hampi. Due to the heat, it is not wrong to leave the area with a tuk tuk. But we also saw people who walked or cycled. Since the sights of Hampi spread over 26 km 2 but we have refrained from doing so.

Important stop on such a day trip is that Royal Center, in the u.a. the Queen‘s Bath, the Mahanavami Dibba, the Lotus Mahal and the Elephant Stables can be found. Particularly impressive is the Vitthal Swami Temple. Admission to most places in the Royal Center of Vijayanagar is with one Ticket for 250 rupees possible. All other ruins can be visited for free.

You should be taken to the ladies and gentlemen who show the temple unasked or explain things and then demand money. If we did not follow them, they shouted pretty loudly (“Come!”). Best ignore such people completely.

Walk along the river

Northeast of the Hampi Bazaars runs a path that runs directly along the river. During the beautiful hike, you will see many temples between the rock plateaus:

Also very nice is one Boat trip on the river in a round boat, where you get the discovered things explained by a driver. There are enough boats on the shore, so you can spontaneously decide on the spot for this tour. We were invited by Giri to a boat tour, the under 9481714261 or 8762025117 can reach.

On a pretty adventurous shell So we went over the river with all our equipment and had the opportunity to capture fantastic pictures with our drone.

After several flights by the river we walked on and discovered something off the wall of a ruined temple, which we almost had for ourselves. Then we climbed the mountain Mantanga Hill, where we wanted to watch the sunset. Unfortunately it was then cloudy, but the climb was through the fantastic view about Hampi and the river yet more than worthwhile.

The many hills around Hampi offer fantastic places to watch the sunrises and sunsets. Unfortunately, we were only able to follow this spectacle on two evenings.

On the first evening we watched the Sunset from Malyavanta Hill out. The green rice fields and banana plantations amidst the rocky landscape appeared in a magical light during the sunset. The evening is accompanied by singing from a nearby temple.

Wonderful is also the Sunset on Mantanga Hill. On this peak you can see Hampi, the gigantic Achuta Raya Temple and the Tungabhadra River.
In addition, north of the river there should still be a summit, where locals meet every evening to make music. Best ask again in Hampi, where to go.

Unfortunately we also had to get to know negative sides in Hampi. Already on our arrival I realized that the Tourism spoiled the locals here. There are small sales huts everywhere, which are supposed to pull the money out of the pockets, especially for the tourists. So far nothing is wrong.

We had decided in the morning to leave the ruins in Hampi by Tuk Tuk. The quite high price of 1,500 rupees We accepted without negotiation because we had some special requests related to our drone.

Compared to other backpackers we paid quite a lot. Nevertheless, the Tuk Tuk driver bargained for free drinks in the meantime and called at the end of the ride aggressive way a tip. It also left a bland aftertaste that he was joking during the day about how successful he was and how good it is to be able to chase away as much money as possible from the tourists.

Really annoying, I found the Kids running after you everywhere, to sell city maps or postcards. The obtrusive manner of the guys leaves little sympathy.

Through all these encounters I could not enjoy the first day as I would have wished. But Hampi has beautiful corners to offer and if you know these things in advance, you can spend a wonderful time in Hampi.

My conclusion to Hampi

The place is really great, but you should be prepared for the unpleasant side effects of mass tourism. These include overpriced prices in restaurants as well as aggressive sellers. If you take it easy and do not let yourself stress, then you have a wonderful time in Hampi. For a stay we can recommend the centrally located Thilak Home Stay.