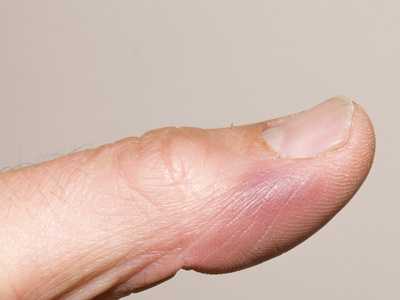 What is an Achenbach syndrome??

The Achenbach syndrome received its name from its discoverer, the Cologne internist dr. Walter Achenbach. The disease is a benign, so benign and self-limiting phenomenon, which was first described in 1958.

In very rare cases, the feet or toes are also affected by hematoma formation. Uncommon for the Achenbach syndrome is that the hematomas appear for no apparent reason and also very suddenly. External effects, such as those in natural hematomas, do not occur. With the Achenbach syndrome, there is no comprehensible cause for the clearly visible and noticeable symptoms. For this reason, doctors also speak of a paroxysmal – ie spontaneous – hematoma.

Especially in women, the causes are probably fluctuations in the hormone balance, because especially in menopause, many women suffer from the typical problems of Achenbach syndrome. In most cases, the onset of hematoma is not unique, and in many cases it always occurs in the same places. Here, especially weak vessels or damaged vessel walls and narrowed vessels seem to be the cause. Even slight bumps in these cases can lead to a spontaneous hematoma. Typically, a hematoma associated with the Achenbach syndrome, for example, when carrying a shopping bag.

The characteristic symptoms of Achenbach syndrome are bruising on fingers and palms or occasionally on the feet and toes. These bruises are accompanied by a stinging pain. The Achenbach syndrome is usually also characterized by mild pressure pain and a subtle discoloration of the skin at the affected area. As a result, it usually comes to a swelling to a bluish color, as is the case with natural hematomas.

Some patients also complain of discomfort such as a feeling of coldness and pain during movement. After a few days, the pain that triggers the Achenbach syndrome, after. About one to two weeks later, the hematomas also form again. Achenbach syndrome is a harmless phenomenon that looks worse than it actually is. Due to the swelling and associated pain, however, the Achenbach syndrome is often perceived as unpleasant. However, as soon as the hematoma expands from the finger to the palm, it relieves the pressure on the affected finger and thus improves the symptoms.

If it comes in connection with the symptoms to massive restrictions in the movement, to an overheating of hand, finger, foot or toe, to chills or fever, patients need to see their doctor as soon as possible. Such complaints are not characteristic of the harmless Achenbach syndrome and therefore require medical clarification.

The diagnosis of the Achenbach syndrome is made by the doctor – usually an internist – on the basis of anamnesis and an extensive examination of the affected area. In most cases, the gaze diagnosis is sufficient. For the first time, the symptoms typical of Achenbach syndrome may require the clinician to conduct further examinations to determine if the patient may be suffering from vascular weakness, constricted blood vessels, or weakness of the vessel walls.

For this purpose, blood is also taken as part of the diagnosis, which is then examined in the laboratory for normal blood coagulation and the normal platelet count and their function. For the exclusion of ischemia (reduced perfusion in the context of a circulatory disorder) of the finger with a very pronounced swelling, a differentiated angiological examination with measurement of the arteries (Doppler or duplex sonography and oscillography) makes sense.

The complications of the Achenbach syndrome occur mainly due to the sudden onset of the syndrome. As a rule, there are no warning signs or symptoms that appear before the onset of symptoms. Malformations on the fingers can complicate and restrict the patient’s life. It usually comes to severe pain on the fingers and bruises. Due to the pain, it is no longer possible for the patient to carry out everyday work and activities, whereby this is extremely limited. There is also swelling and blue discoloration on the affected finger due to bruising. Also sports activities are only possible for the affected person. The treatment itself is primarily aimed at combating the symptoms. The pain and swelling can be restricted with the help of cold, so that a normal everyday life is possible for the patient again. There are no further complications. However, the affected person must avoid efforts and burdens during healing so that the pain from Achenbach syndrome does not recur. Life expectancy is not reduced by Achenbach syndrome.

Strong strains on the affected area on the fingers, palms, toes or feet should be avoided throughout the healing phase, at best immobilized by hand or foot. Especially with weak or damaged vessels, conservation is of great importance. If it comes to premature strain or over-exertion, the healing can take much longer. It may also aggravate the symptoms of Achenbach syndrome.

Already with the first symptoms the affected hand, the affected finger or the affected areas on the foot should be cooled. In addition, it is advisable in this context already in the initial phase of the disease immobilization.

What experiences and pointers do you have about Achenbach syndrome??

Comments and experiences from other visitors

I am almost 60 years old and have in recent weeks both on the hands (fingers) and on the toes bursting vessels. In my opinion, the pain (short, strong pain) seemed to be caused by increased pressure in the vessel. With the bursting of the vessel and the formation of a hematoma, the pain disappeared. After there was no detectable trigger before, the vascular dilation seemed to be triggered by heat (sauna visit) or a slight shock. I used to react to a strong temperature change from cold to warmth (in winter after a hike) with severe itching and wheals on the thighs.