10 destinations with children around Vienna

for a family outing with children around Vienna

There is a lot to discover for families around the city of Vienna. If you are looking for excursions with children around Vienna, you will find it relatively quickly. Depending on the age and interest of the children, there is not only something to discover with the museum village, in the Römerland Carnuntum or at Schloss Hof, this is also associated with a lot of exercise for children.

Children who prefer to marvel at animals will find many creatures in the Ernstbrunn wildlife park, in the Sparbach nature park or in the Orth castle. Adventure and excitement are provided in the fossil world, at the Myra Falls, in the family park or in the railway museum. 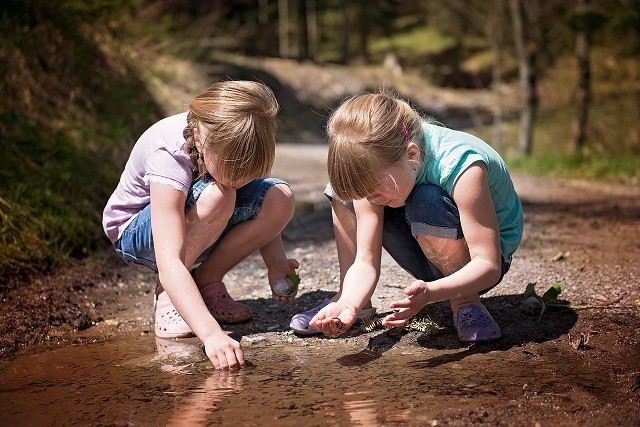 10 destinations with children around Vienna:

Lower Austria’s largest open-air museum is located in Niedersulz. The aim is to show what the Weinviertel used to be like and to provide an insight into the ways of life and habits of previous generations.

The historic buildings were demolished at their original locations and rebuilt in the museum village using the original building materials. There are now over 80 buildings in the open-air museum, such as farms, craft houses, chapels, a school, an inn and even a cellar alley with press houses.

tip: The Betty Bernstein – family tour "Riddles to the treasures of a Weinviertel village around 1900" – a tour of the museum village including playful, interactive riddles for the whole family.

There is a large park with many animals between the oak forests and Ernstbrunn Palace. Some types of deer and mouflon cross the visitor paths in the walk-in enclosures and chamois and ibex climb through steep rock faces. The wild boars particularly like the oak forest or are dug for acorns. The Ernstbrunn wildlife park stands for animal welfare and the best zoological care.

For the children, there are not only exciting insights into the wolf enclosure, but also a large playground with tree castle, as well as sheep and goats for feeding.

The Fossilienwelt Weinviertel near Korneuburg is actually very close to the city of Vienna and therefore also an ideal destination for families. A journey through time, a look at the origins of the Weinviertel oyster reef and the tropical world 17 million years ago. A lookout tower in the form of a snail with a view and for children there is an adventure playground or grave areas where the children can search for real fossils.

Tip: the Kreuzenstein Castle is nearby, with an eagle’s watch, so it can be easily combined &# 128578;

The Sparbach Nature Park is located in the southern part of the Vienna Woods. The walled area contains old ruins, giant trees and large areas with meadows and forests where all kinds of animals frolic. A large adventure playground and motor skills stations offer a space for children to let off steam.

For older children, we recommend a hike through the gorge with the Myra Falls in Muggendorf. It crosses bridges and footbridges along the Myra or the valley of the Myra Falls. At a safe height you cross smaller and larger waterfalls and the children can experience the power of nature up close.

A trip to Hof Palace, formerly the country estate of Prince Eugene of Savoy and Maria Theresa, not only gives you an insight into the magnificent palace apartments, but also enables you to enjoy the beautiful baroque garden and the animal kingdom of the estate.

Especially for families with children, adventure trails have been set up in the manor, on which the children can experience the story interactively. The petting zoo, children’s theater and the children’s and family world in the Bäckenhof with baroque theater and workshop rooms for handicrafts and baking bread round off the family experience. During the summer holidays there are additional programs at Schloss Hof.

Roman city Carnuntum – Roman camp and a lot of history

Back to the past – or living past in the present. However, the past comes alive in the Roman city of Carnuntum. The history of the Romans or the Romans in Carnuntum can be experienced in the rebuilt district. Many houses and facilities were rebuilt and with those wise extensions such as Roman underfloor heating, they provide a great insight into this time.

Children can take part in special tours, as well as baking Roman flatbread themselves, or a large playground or the extensive areas offer plenty of space to let off steam. The green areas of the Roman quarter, as well as both amphitheaters, are easily accessible with prams.

Austria’s largest amusement park, the Familypark in St. Margarethen, offers a mixture of driving equipment, water attractions, climbing facilities and adventure areas. Fairytale forests, train rides, and a separate farm make children’s hearts beat faster. A whole day should be planned for these excursion destinations, for breaks there are also quiet places and many catering stations on the premises. The entire area is designed for pushchairs and wheelchairs.

The visitor center of the Donau-Auen National Park is located in Orth Castle. From here you can get to know the fascinating worlds of animals and plants in the Danube meadows. A dedicated underwater observation station also allows a look under the water surface.

On the castle island there is a lookout tower, a suspension bridge and a large bird nest to let off steam. In-depth insights are offered with boat trips and hikes.

One of the largest railway collections in Austria is located in the Heizhaus Railway Museum in Strasshof. There are over 350 vehicles and historic operating facilities to visit here. The locomotives and wagons show the construction and the way of locomotion in different epochs from 1837.

You can find more excursion tips around the city of Vienna: Excursions around Vienna.