Getting pregnant with ovulation: you need to know

Getting pregnant with ovulation is possible when you know when ovulation is taking place. However, most women do not know the best time to get pregnant and that not every month the chance of a successful fertilization and thus pregnancy is, is also unknown to many.

In this guide, we’ll explain when to get pregnant with ovulation, what solutions there are when no ovulation occurs, and the signs that many women feel when ovulation has occurred.

1. Fertilization should take place before ovulation

An egg is only able to be fertilized for a maximum of 24 hours. Therefore, intercourse may be one of the reasons why some women do not get pregnant. The sperm of a man can survive up to about 5 days, so it is recommended, Approximately 2-3 days before ovulation and at the latest on the day of ovulation sexual intercourse to have. This short time window already shows why, in principle, some couples may take longer to get pregnant.

The easiest way to become pregnant by determining ovulation is to use an ovulation test. This measures the LH value (Lutenisierendes hormone), which triggers ovulation. So that the upcoming ovulation can be found out very easily.

Who wants to become pregnant with the determination of ovulation, of course, now has to know when the ovulation takes place. The easiest way to find this out is with the help of a calendar. There are, for example for the mobile phone different apps in which the woman enters her period and the app automatically calculates the fertile days or the day of ovulation.

If the woman has only an irregular cycle, the app only calculates the probability of ovulation. Therefore, it always makes sense to rely on his body. This shows some signs that one around the 14th day after the period can perceive.

2. Middle pain is often an indication of ovulation 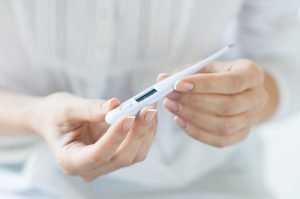 An increase in temperature means that ovulation has already occurred!

Many women already know the signs as an advance notice for the period (PMS): back pain, abdominal pain and sometimes an irritable mood. Who looks very closely at his body, can also feel the ovulation. It is about the Middle pain, which is usually perceived only as a short pull.

Much easier, because clearly recognizable (and also at the right time before ovulation), is the cervical mucus. This changes its consistency before ovulation so that the best time for sexual intercourse can be determined.

Caution: Many women rely on measuring the temperature. The problem with temperature rise is that it occurs after ovulation and the best time for fertilization is over.

3. If there is no natural ovulation, medically can be helped 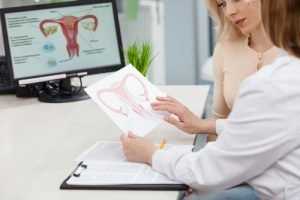 If it is not natural for ovulation, hormone treatments can help by a gynecologist.

Many women do not get pregnant even after years. This may be because not always an ovulation in the body is triggered. This is not a rarity and may have several causes that are often hormonal. In this case, it is still possible to get pregnant with ovulation when you are Support from his gynecologist get.

For example, there are medications that contain hormones that cause ovulation in the body. Often, these tablets are given with an additional hormone injection, which may increase the chance of pregnancy or successful fertilization. About 1 week after fertilization, an existing pregnancy can be confirmed with a blood test. Pregnant without natural ovulation is thus possible!

4.1. Can I of course increase my fertility??

There are different methods to increase his fertility. This is useful, for example, when a woman has been taking the pill for years and has thereby brought the hormone balance out of balance.

are Man and woman physically healthy, The fact that you want to get pregnant but still do not work out can be increased by a few simple methods.

4.2. Ovulation despite pregnancy: Is that possible?

In theory, it is actually possible that during ovulation (but only at the beginning) another ovulation is triggered. This has already led to women giving birth to children with a few days of age difference. These are, however absolute exceptions, because the body usually prevents ovulation during pregnancy.

4.3. I know through my monthly period that I ovulate occurs? 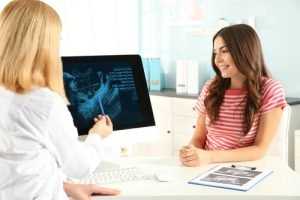 First, there must be a follicular blister in which the egg can nest after ovulation. This is evident in the ultrasound.

In fact, it is like that Menstruation is unrelated to ovulation. Whether or not ovulation takes place can be very reliably determined by a gynecologist using various methods: