One of the most natural sections of the Sierra Nevada in California is an approximately 140-kilometer-long area in the highlands of the Sierra National Forest above the Kings Canyon National Park. If you stay in this wilderness area, you will come close to nature. At altitudes of more than 3000 meters you are often alone with you, the pine forest and a climate that still provides snow for May. This area is named after John Muir, as is a glacier in Glacier Bay National Park, Alaska. But who was the man whose name is so often associated with national parks??

John Muir was born on April 21, 1838 in Dunbar, Scotland, as the third of eight children. When John was eleven, the family relocated to America because the deeply religious father did not feel the church practice of the Church of Scotland was sufficient and he hoped for more religious opportunities in the New World. The Muirs first settled on a farm near Montello, Wisconsin, where John soon set out to explore the surrounding countryside. In a way, the boy’s enthusiasm for nature was probably also the result of the father‘s attempts to stop it-Daniel Muir considered employment for anything that was not in scripture frivolous and unattractive.

At age 22, John Muir enrolled on his own at the University of Wisconsin at Madison to study chemistry. This consolidated his love for the sciences in general. However, he did not achieve a degree. A little later, the Civil War broke out and John followed his brother Daniel, who escaped convocation, to Ontario, Canada, where he spent almost a year exploring the forests and swamps on the shores of Lake Huron before joining Daniel together accepted work in a sawmill. During this time, however, he continued his exploration and collected an extensive botanical collection of plants, which he found there.

In 1866, Muir went to Indiana, from where he left for a hike one year later to Florida – a distance of about 1,600 kilometers or 1,000 miles, which he later turned into a book. Muir had not marked any distance for this huge trip, he just marched on it and, as he later described, always followed the “wildest, overgrown and least traveled path”. Arrived in Florida, he boarded a ship a short time later, with which he translated to Cuba, only to return shortly thereafter by ship to New York and then to California. Wherever he stopped off, he took the opportunity to deal with each of the native plants. In California, he finally seemed to want to stay for a long time, here he was an employee of the State Office of Coastal Surveying. However, he gave up the job in a very short time and instead became a shepherd in Yosemite; an area that had fascinated him on the first visit over all dimensions. 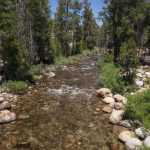 From then on, Yosemite determined John Muir’s life. He built a hut on Yosemite Creek, designed so that part of the stream flowed through it. First Summer in the Sierra was the name of the book that was created in this environment within two years. Muir described in a very impressive way the sensations that the encounter with nature had in him. All this he experienced alone, with no steady income and seemingly without any other interest, save for some income from occasional articles for newspapers and magazines he wrote. In 1874 he first met Louisa Strentzel, who had been introduced to him by his longtime good friend Jeanne Carr and later his wife should be. The father of the young woman ran a fruit farm and Muir assisted him with his expertise in botany with help and advice. For the next ten years he worked on the farm, and while the marriage to Louisa produced two daughters, Muir still kept taking the time to go on a multi-day hike to the Yosemite alone – his wife had no interest in it, only his daughters occasionally with. Gradually, Muir made a name for himself as a proven expert on the biology and geology of the Valleys, so that more and more visitors specifically asked him to learn something about the nature of the area.

One of these visitors was Ralph Waldo Emerson. The writings of the naturalist from Massachusetts had long fascinated Muir, he had even taken her on some of his walks. Emerson was also enthusiastic about his opponent, even so much that he offered him a teaching position at Harvard, but Muir refused. As a result, he began to focus his scientific interest on glaciers, including taking several trips to the deepest Alaska.

Soon, however, Muir had to reduce his activities somewhat, because his health subsided. Although the excursions on his own now rare, but for Muir invented himself as a conservationist. The Yosemite Valley and the Sierra Nevada were untouched land for him, and above all, he wanted to keep from being hit by grazing livestock. He wrote journal articles in which he called for a National Park similar to the Yellowstone also for the Yosemite set up and indeed he was able to attract the attention of the Congress. His law created the new national park in 1890.

But many nature lovers in California were still concerned about preserving the area. Together with influential personalities he founded in 1892 in San Francisco the Sierra Club. To date, the Sierra Club is one of the largest and most influential conservation organizations in the US. Muir bravely embarked on his new role as club president, earning one of his first successes transferring oversight of Yosemite from the state to the federal government. The decisive factor for this rededication was a visit from President Theodore Roosevelt given. After inspecting Yosemite Valley, the president asked Muir to show him the true Yosemite. The two men retreated without the entourage of the president and spent the night outdoors. Roosevelt, who had previously displayed Muir’s knowledge of nature, was so impressed with the experience that the next morning he spoke of a temple “that no human architect could ever build”. In 1906, thanks to the pressure from the Sierra Club and the President’s conviction, the transfer of the Yosemite National Park under federal administration. With his successor Woodrow Wilson, however, Muir had less success: The equally important project to him to prevent the construction of a dam on the Toulumne River, failed with the signature of Wilson for the construction in December 1913.

John Muir died on Christmas Eve 1914 from pneumonia at the age of 76. It is to a large extent due to his inimitable talent to describe nature in words that the protection of nature became a common theme. Muir is sometimes referred to as the “patron saint of the American wilderness”. His Sierra Club continued to protect many more areas in the US after the co-founder’s death. He is a member of the California Hall of Fame, has been honored with a commemorative stamp, and even has his own day of remembrance in California, April 21st.