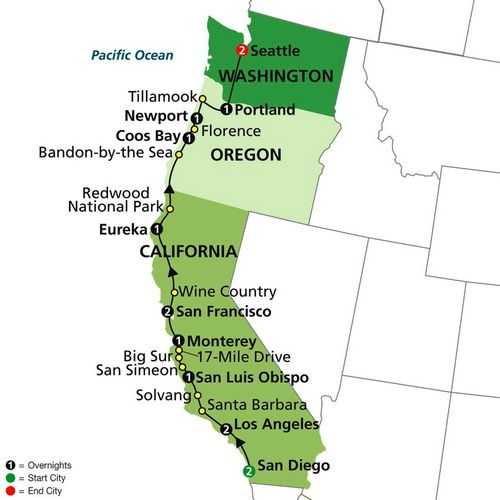 West Coast – The States of the Pacific Coast

When talking about the West Coast of the United States, almost everyone first thinks of the sunshine state of California. Where the beaches are just as beautiful as the Beach Boys and the Bay Watch Girls, where the waves and surfing never stop.

In fact, California has much more to offer than these clichés (but there are too!), And the West Coast is not just California. Washington, for example, is one of them. In the far northwest is Alaska, and in the south, as an outpost to the coast, is the Island Paradise, which as the state of Hawaii belongs to the United States.

Alaska is certainly one of the most exciting travel destinations in the US. Of course, whoever puts it on a classic summer vacation, should keep his fingers off Alaska. This land is for nature lovers, for outdoor freaks, for adventurers and explorers – for sunbathers it is nothing. If you visit Alaska, you will visit the largest state in the US and at the same time the most sparsely populated. Vastness and loneliness will shape this journey. Not even one million people live in Alaska, half of them in Anchorage, the country’s largest city. Incidentally, the most pleasant temperatures are around Fairbanks. There, the thermometer can climb in the summer even a few days up to 30 degrees – if you catch a good summer. Both Anchorage and Fairbanks are the hub of Alaska, from here you can easily travel to more remote regions. Alaska is a land of overwhelming beauty and purity. Here you can experience pure nature, but must also cope with the inconvenience that brings with it. Especially for tourists who want to get closer to the Arctic, Alaska is the ideal destination.

On trails to Jimi Hendrix

In comparison, the state of Washington presents itself much more “civilized”. Of course he has his name from the first President of the USA, George Washington. The same applies to the US capital, Washington D.C. (Abbreviation stands for District of Columbia), which lies however in the east of the USA. This is a fact that sometimes confuses even Americans. To keep the confusion as low as possible, the country is often referred to simply as the Washington State. If tourists from Germany should immediately feel at home in Washington State, then that can be explained. With over 20 percent, German-Americans make up the largest population group here. Washington State has a lot to offer its guests from all over the world. Three national parks are waiting to be hiked. Moderate climatic conditions invite as well as relatively well to overcome differences in altitude. For the urban counter-program Seattle, a city that has become a bustling metropolis. Music fans may be interested to know that the city has erected a memorial to their “son” Jimi Hendrix. So that your hiking utensils are complete, we have created a checklist for the hiking holiday in the USA.

South of Washington, it goes through Oregon to the dream destination of many US travelers: to California. Here you will find endless beaches, a seemingly always sunny sun and of course, not forgetting, 5-star destinations like San Francisco and Los Angeles. The Pacific Ocean and its sometimes really breathtaking coast are just as worth a trip as the relaxed lifestyle of the Californians. With San Francisco, one of the most famous cities in the world is waiting for tourists. Gourmets from all over the world meet here as well, because the city has an extraordinary density of excellent restaurants. If you are more interested in celebrities than in starred cuisine, you must not miss Los Angeles and Hollywood. Here, the guest still experiences a fascinating mix of success, vanity, luxury and failed dreams. By the way, even the California hinterland has its charms. Wine lovers should take some time to visit the Sonoma Valley and Napa Valley vineyards.

Aloha in the ocean

Anyone lucky enough to travel to Hawaii will be intoxicated without wine. Even the names sound like wanderlust, waves, flower chains and friendly people. You land at the Honolulu International Airport, which is located on the island of Oahu. From there it could theoretically go straight to the Waikikki Beach. Or would you rather travel to one of the other islands, which together make up the state of Hawaii? For example to Maui with its breathtaking landscapes? To Hawaii Island with its volcano? After Kauai with its legendary good air, or, or, or. Those who travel the long way to Hawaii, should prepare well for this unique group of islands. It is so diverse that it would be a pity to miss something that might suit your own interests.