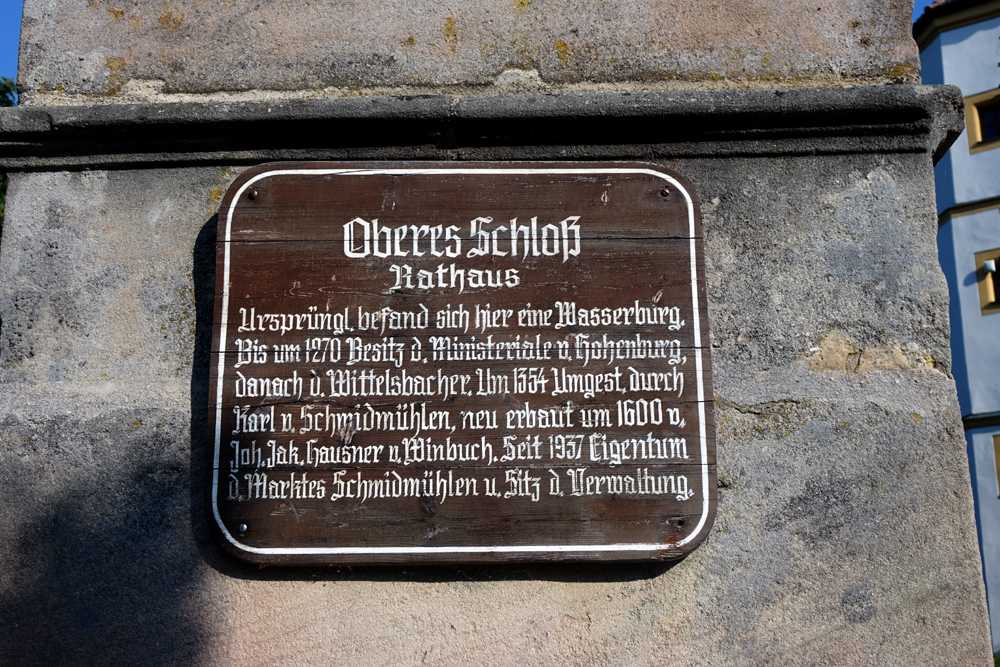 It was only by chance that I got lost in the pretty village of Schmidmühlen south of Amberg. As a starting point for my two – day hike on the juniper trail I had not paid much attention to the market – until I parked my car in front of the town hall on a hot Friday morning in July and saddled my backpack for the 30-kilometer footpath.

A quiet village, seemingly far away from any civilization. Today little known and left by many young people to live and work elsewhere. And yet too enchanting to just run away and leave the gem behind without taking a second look at the many sights.

There, where the Lauterach in the district of Amberg-Sulzbach flows into the Vils, lies the market Schmidmühlen. Around 1000 AD, Schmidmühlen was owned by the market count of Hohenburg and is already mentioned in a document. The name of the place suggests that there was a forge mill here. Even in the Middle Ages Schmidmühlen was the crossroads of various trade routes, among them the Bavarian iron road. In Schmidmühlen, this great economic significance gave many diligent craftsmen wealth. The market coat of arms with a hammer and a mill wheel first appeared in 1311. Today, Schmidmühlen has a contemplative population of 2,300 and, accordingly, it is quiet. Strangers are curiously looked at here and are also welcome – to move on with a useful tip and good wishes.

It seems almost a bit presumptuous, because here are three so-called castles, which testify to an eventful history. Like a magic triangle, the three castles lie in the center of Schmidmühlen: the Upper Castle, the Ziegler Castle and the Hammerschloss.

On the site of the Upper Castle was originally a moated castle, on which until 1270 ministers of the Hohenburg counts romped. Then the estate was wittelbachisch and around 1353 subjected to a major renovation in which the castle was largely redesigned. The present castle was built around 1600.

On the ground floor was a small chapel, which was walled up long ago. Again and again the owners changed. By 1900 nobody lived or worked in it anymore. Rather, the building was used to store hops and grain. Only when the castle was sold to a Nuremberg architect in 1919, it was thoroughly renovated and in 1937 became the property of the market town of Schmidmühlen. Since then, it has been used as a town hall, but suffered greatly during the Second World War by the occupying powers. Upstairs today there is a local history museum.

In 1326 one of the most significant hammer works of the Upper Palatinate was found here. After many years of economic prosperity, there was a change of ownership until 1666 Johann Adam von Senglau bought the Hammergut and founded a paper mill below the factory. By his successors in 1700 the baroque hammer castle was built.

Stucco ceilings by Italian artists, late Gothic elements and Baroque influences make the Hammerschloss something very special to this day. In its history, the lower castle has already fulfilled a variety of purposes: poorhouse, warehouse, prison, school and of course residential house. After the renovation, which lasted until 2003, the former Hammerschloss became a cultural, parish and community center.

Since the restoration at the turn of the millennium, the elaborate façade with its differently rough plaster is particularly beautiful. And although one may not suspect it in the baroque building, inside a medieval core. The hall and the two representative rooms are furnished with sophisticated stucco ceilings. The main motive is the acanthus. The Bärenklaugewächs, which originally originates from the Mediterranean, was found around 1700 but also in Bavaria often use. At that time, Italian artists in the Upper Palatinate were in high demand.

In addition to the Hammer and the Upper Castle, Schmidmühlen also has the Ziegler Castle, the youngest of the three castles. It is located in today’s Kreuzbergstr. 4 and was built around 1757 on the model of a French country castle. In contrast to the other two castles, however, the Ziegler Castle is not needle seat. The Zieglerschloss was built by Josef Georg Felsner in the area of ​​a former, community-owned brickyard.

Originally the Felsner family came from Kastl, however, the Ziegler and grandfather of the builder moved to Schmidmühlen to marry the beer brewing daughter Anna Kolb. Josef Georg Felsner, left Schmidmühlen at the age of 16 and wandered through half of Europe. In France, he learned the art of making snuffboxes. At the time these cans were an indispensable utensil for everyone. When Josef came back to Schmidmühlen as a 30-year-old, he started building the Ziegler Castle in the same year.

He also founded a factory for the production of Snuff boxes secret method that he had met in France. His tobacco can production was a serious competition for his French teacher, who then sought his life. Only with luck he escaped an assassination by a gun-filled box, which would have discharged when you open the lid.

location: You go down from the Upper Castle (Rathaus) the Rathausgasse, over the bridge. The Zieglerschloss is immediately on the right side on the Kreuzbergstraße, corner Dr.-Pfab-Straße in front of the cemetery.

Directly in the center of the town stands the tower of the Roman Catholic church St. Ägidius. Built in 1486, on the day of Corpus Christi, in 1807, the tower, topped with a baroque onion dome, collapsed, destroying the choir as well. The tower was rebuilt in 1832 and received the still existing flat roof in the Italian style. We have our two day tour on the juniper trail started and supplied us once with a few treats from the village bakery.

If you need a little refreshment for your hike, just stop by one of the two bakeries around the corner.

In memory of the early days: the sculpture path 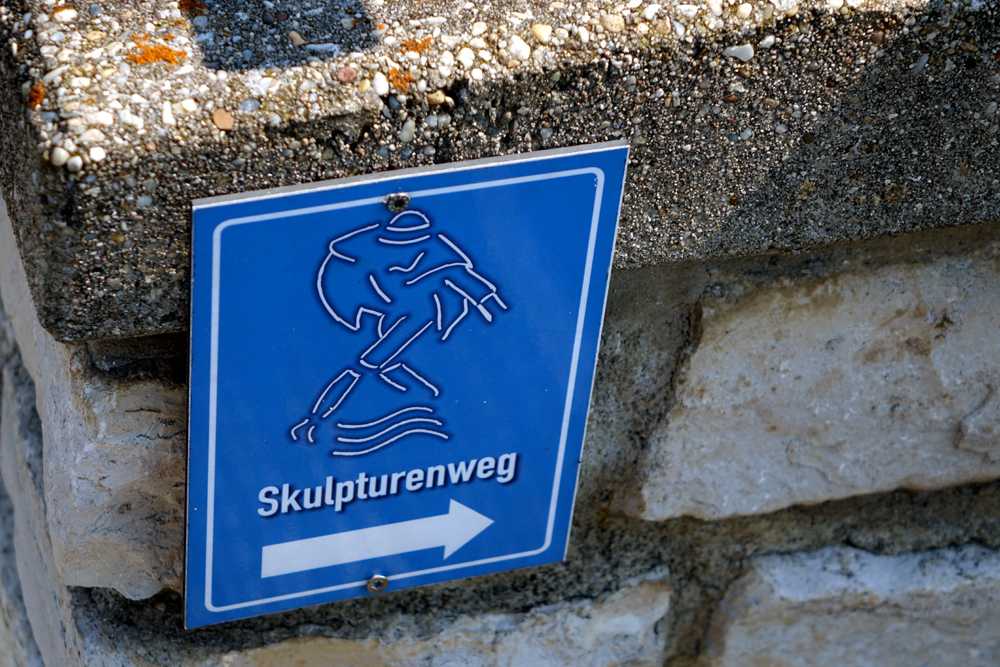 The metal sculptures that have lined the banks of the Lauterach below the town hall in Schmidmühlen since 2010 have Franz Schmid designed. He chose the material wisely. What could be more appropriate than to refer to the long tradition of Schmidmühlen in iron processing in the sculptures? The artist used only six millimeters thick round iron, which he cut and welded together. There are 70 meters of this round iron in each Moriskentänzer at the flood wall – and of course a lot of work.

The watering can tree

Great events cast their shadows. In Schmidmühlen it is 2018 that is not only the 40th Market Festival, which takes place in early August. 2018 marks the anniversary of the death of the most famous son Schmidmühlens Erasmus Grasser for the 500th time. Of course Schmidmühlen came up with something very special: a maple tree adorned with around 200 watering cans.

The watering can tree is right next to the Kunstwanderstation at the parking lot at the Mühlwiese and can still be admired there for a few weeks.