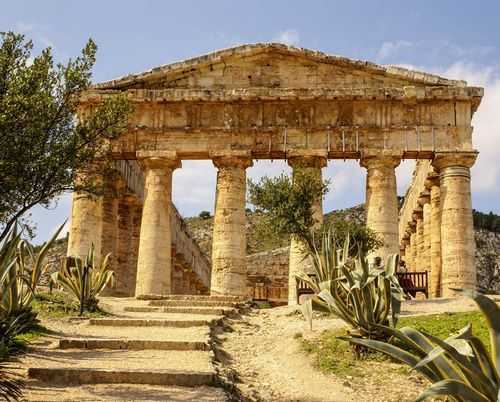 Catania on your own

Here we have compiled information for shore excursions in Catania on your own. The second largest city of Sicily (about 310,000 inhabitants) lies at the foot of the volcano Etna and is a frequent destination of Mediterranean cruises. Catania was almost completely destroyed by a volcanic eruption in 1669 and an earthquake in 1693. The present town was rebuilt with lava rock in the style of Roman Baroque and is today together with other late Baroque towns of the area (Val di Noto) World Heritage by UNESCO. The baroque churches and palazzi are now among the city’s attractions. Of course, land excursions to nearby Etna are among the most popular activities of the land-raiders. We would prefer an organized shore excursion here. But also Taormina can be reached from Catania. The tourist information is represented in the cruise terminal. An informative website, as so often in Italy, unfortunately does not exist. (As of: October 2019)

The cruise port of Catania

Cruise ships arrive at the port of Catania close to the city. On nice days you should be on deck. It offers a great view over the city to the volcano Etna.

The modern cruise terminal can be recognized in the picture above in front of the cruise ship of Celebrity Cruises. This is the middle ship with the two chimneys. In the terminal building there is a tourist information, Internet, some restaurants, some shops and a bike rental. Parking spaces for taxis and land excursion buses are available. More information can be found on the website of the Catania Cruise Terminal.

If there are several cruise ships in the harbor, which is not that often, there are more moorings in the sprawling harbor. In the picture above you can see a cruise ship from Costa Cruises at the long pier and another cruise ship from TUI Cruises further down.

Mobile in Catania on your own

The subject of mobility is a central point for all crusaders who plan their cruise trips in Catania on their own initiative. Ultimately, it is about the question of how to get from the port to the desired land destinations. For this we have compiled information here:

If you want to see the baroque city of Catania, you can just walk into the city. Piazza del Duomo is just 1.2 km away. The center of the city can be easily explored on foot. The distances are manageable and gradients are not in the center either.

We have here two city maps in PDF format deposited, which include both route suggestions for a city tour. City Map 1; City map 2

The company Tourist Service operates a tourist train and open top panoramic buses. The round trips start at the cathedral square. Information about routes and prices is available on the website of the provider. We saw the vehicles in front of the cruise terminal and assume that you can get in there directly.

Another city tour company is (was) Katane Live. The company has recently received a lot of criticism on the Internet. The website is no longer accessible and it is questionable whether this provider still exists. Anyone who likes to book hop-on hop-off tours with internationally known companies such as City Sightseeing or Big Bus Tours must be prepared for the fact that the service of small local providers is worse.

Adding to the metropolitan area, Catania is quickly becoming a megacity. The second southernmost subway in Europe was put into operation in 1999. Today there is a line with two track branches. A metro station is near the harbor. Nevertheless, this means of transport is rather uninteresting due to the routing for land recruits. Unless you want to take the regional train Circumetnea. Then you can reach the Borgo station from the port well with the subway. Also the main station can be reached by subway.

The Ferrovia Circumetnea (circumetnea.it) is a narrow-gauge railway, as it was formerly very widespread in Sicily. The train starts at the Catania Borgo station, goes around Etna and ends about 30 kilometers north of Catania in the village of Giarre-Riposto. The more than 110 kilometers to the final stop takes 3 hours. In Giarre-Riposto you walk about 200 meters over to Trenitalia Giarre-Riposto station and from there you can take a regular train from Trenitalia back to Catania.

For railroad fans a great tour. An appropriate preliminary planning is helpful. Until 20 years ago you could get in the harbor. Since then, the metro has taken over the section from the port to Catania Borgo station.

Taxis are waiting for customers at the cruise terminal. For a trip to the center was on our last visit in 2019 10 euros required. Other offers were:

It is a price for up to four people. The fares are not fixed and must be negotiated locally. Before departure should always agree on the costs.

The largest taxi center on site is Radio Taxi Catania with a German-language website. Here you can find more information and can also order a taxi in advance.

Those who want to explore the region of Catania on their own should think about a rental car. In the big building at the harbor exit (Via Cardinale Dusmet) we saw signs Avis and Budget. Other providers are spread all over the city.

The company Tourist Service 2006, which also operates the tourist train (see above), lends e-bikes for 5 euros per hour.

The city of Taormina is a popular land destination. From Catania, Taormina can be reached on your own by train and bus. Apart from taxi and rental car of course.

Catania Centrale Central Station is located in Piazza Giovanni XXII and is less than a mile from the port. If you want, you can use the subway for the route. At Trenitalia (trenitalia.com), timetable information is also available in German. The journey to Taormina-Giardini takes between 40 minutes and one hour, depending on the train. From Taormina-Giardini station, buses go up to Taormina, which is higher.

If you do not feel like bothering about vacation with timetables or local taxi drivers, you can choose from a wide range of organized land excursions. Corresponding offers can be found aboard the cruise ship or at local tour operators. By way of example, we include the land excursion program of the popular German shipping company AIDA Cruises for Catania. There is something for everyone. Other shipping companies have a more or less similar program. For the shipping companies, these cruise excursions are an important business. Accordingly intensive is advertised.

Those who like it more individually or who are deterred by the high land prices on board should take a look at the offers of local tour operators. These can be conveniently and safely, for example, at Viator * (see above) book. Most German speaking land excursions from Meine Landausflüge * can be found at the bottom of this page. Here is a punctual-back-to-ship warranty included in the price of shore excursions.

Highlights for shore excursions in Catania

This port offers the land-rovers numerous interesting destinations and activities for a day in Catania on your own. In addition to the Baroque old town, the volcano Etna and Taormina attract many tourists from the cruise ships lying in Catania. Also a day at the beach possible.

As mentioned above, the city was almost completely destroyed at the end of the 17th century. The reconstruction took place in the style of the Roman Baroque. Lava rock was enough. Together with neighboring villages, also rebuilt in the style of the Roman Baroque, Catania has been a UNESCO World Heritage Site since 2002. The vacationer can stroll in the old town, see the beautiful buildings and enjoy the flair of the city.

The main street is called Via Etnea and extends straight from Piazza del Duomo towards Etna. Many shops, restaurants and attractions are located here. The Piazza del Duomo can be reached from the foot of the jetty in about 15 minutes on foot. In the piazza you can visit the cathedral of Sant’Agata and the elephant fountain. In the immediate vicinity is also the local fish market.

Turning to the left after the elephant fountain in Via Vittorio Emanuele II, you can reach the Roman amphitheater after about three hundred meters. If you want to, after a short visit you can simply follow Via Vittorio Emanuele II and after another 300 meters turn right into Via Quartarone. Then, after a few meters, you will be in front of the Monastero dei Benedettini. The visit is especially worthwhile, if you join in a guided tour. If you want, you can return to Via Etnea afterwards. Passing through the Via Teatro Greco behind the amphitheater, you pass the beautiful Chiesa San Benedetto on the way.

Back at the Piazza del Duomo, behind the cathedral, turn right onto Via Vittorio Emanuele II. After a short walk you reach Piazza San Placido. Turn right here and then immediately left into Via Museo Biscari, you are in front of the most famous Palazzo of the city, the Palazzo Biscari. Goethe was already living here.

Returning to the Via Etnea and following the boulevard, one inevitably encounters other beautiful churches and palazzi. Even the small but beautiful botanical garden is located on this street. Ideal for hikers.

The highest volcano in Europe, at 3,323 meters, is a UNESCO World Heritage Site and, of course, a popular destination for shore excursions in Catania. Mount Etna is a very active volcano with four summit craters. The quite frequent eruptions usually occur over the flanks of the summit craters.

With the new cable car Funivia dell’Etna (funiviaetna.com) and off-road buses, you can reach the summit region today. The old cable car was destroyed in an outbreak in 2001/2002. The valley station is at 1,900 meters above sea level at the Silvestri crater. You can drive here by car. For example, with a rental car. The parking fee was last at 6 euros. The cable car goes in about 15 minutes to about 2,500 meters. With all-wheel buses, it continues on to about 3,000 meters. The whole (cable car and bus) cost in the summer of 2019 67 euros per person. You have to hope a little for good weather and take warm clothes and sturdy shoes. The best chance for good weather is when you leave in the morning.

Around the Etna there are numerous excursions on board and at local providers. Four-wheel drive tours and hikes are popular.

About two kilometers south of the cruise terminal begins a long beach that stretches over several kilometers. A managed stretch of beach at the beginning of this beach is the Lido Azzurro Beach (lidoazzurrocatania.com). Here you will find a complete infrastructure with changing rooms, lockers, showers, loungers and umbrellas, catering and animation. The visit is not cheap, as you pay for all the services used, from the parking lot.

South of the Lido Azzuro Beach there are more managed beach sections. Among them the Lido Alkamar (alkamar.it), the Lido Verde (lidoverde.it) or the Lido Excelsior (lidoexcelsior.it). The Lido Verde even has a website in English.

Taormina is just over 50 kilometers from Catania and is a popular destination for crusaders whose ships are in Catania or Messina. The small town with its tens of thousands of inhabitants was already the destination of Goethe’s trip to Italy and later a fashionable resort for aristocrats and movie stars. The small medieval town lies on a natural terrace about 250 meters high above the sea. In the partly car-free city, it is best to walk. The distances are short. The small streets are however full of tourists, because many day visitors come here. The biggest attraction is the ancient Teatro Greco. Otherwise, Taormina is a Gesamtkunstwerk, in which you can just drift a little.

Land excursions with harbor pickup, punctual-back-to-ship-guarantee and German-speaking tour guides (with most tours) are available at My Land excursions *.