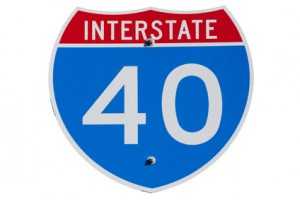 Roads in the US – Interstates, Highways & Co.

The United States has a wide network of freeways and highways. Basically, three types of roads are to be distinguished. The Interstates, the Federal Highways and the State or Provincial Highways.

Interstates run across the country and are comparable to European motorways. They are abbreviated with "I" (For Interstate Highway) and the number of the road, e.g.. "I 75". The traffic signs with the street names are red-blue with white writing. The Interstate Highway system covers nationwide about 68,400 km and allows to drive from coast to coast or from border to border, without intersection or traffic light. The interstates account for about 20% of motorized traffic, even though the road lenght itself is only about 1% of the total US road system. The safety on the Interstates is statistically indicated as twice as high as those on other roads. 90% of the costs are borne by the federal government and 10% by the respective state. The interstates are usually the fastest connection, but not the most scenic.

The Numbering of highways is very systematic: the North South-Highways carry odd numbers, from I-5 along the Pacific coast to I-95 on the Atlantic coast. The East West-Highways are carrying numbers from I-8 and I-10 at the Mexican border to I-94 at the Canadian border. If the motorway number has three digits, the first digit of the name usually contains a direction. If the first digit is a 2, that means the direction in which the highway leads (e.g., Interstate 271 joins Highway 71). If the first digit is a 4, the highway will loop around a city rather than directly into the center.

The Highway exits (exits) are consecutively numbered and thus a good orientation: if you know the exit number, you know as a traveler easily, when and where you have to leave. However, the exit numbers are assigned per state. As the freeways cross several states, there is therefore Exit 1, e.g. several times (in principle in each state once per highway). However, the system of numbering is still not standardized nationwide. In general, the recommendation for the states is to adjust the exit number of the miles indication of the exit (Mile-log numbering system). This means in plain English: an Exit 5 is a departure after 5 miles on the highway. For north-south highways, the numbers (miles) are counted from south to north, for east-west highways from west to east. The first exit of I-75 in Georgia (Exit 2) is thus near the Florida border, the first exit of I-20 in Georgia (Exit 5) near the Alabama border. Alright? The advantage of the mileage system for the traveler is in any case, that you know where you are in about and how far you have to drive without having to expect big. Of course, the downside is that Exit 7 does not need to follow Exit 8. But to make the clarity even clearer: not all states use the mileage system.

The American Interstates can be compared with the European highways. As an abbreviation you use the initial "I" and the street number.

In some states, exits are simply numbered consecutively, so here’s where it starts on the border with Exit 1, followed by Exit 2, and so on. But the nicest thing is when a federal state changes its existing system. This happened in Georgia in the months of January to July 2000 and in Florida in the months of January to July 2003: The current numbering system was changed to a mileage system. Due to the changeover, the exit details on older maps in Georgia and Florida are almost always wrong. The same applies to the descriptions of the hotel driveways in the hotel brochures. For an overview of the old and new exit names in Florida, see the keyword “Florida Traffic Rules”.

The signs on the highways are differentiated in color:

driving instruction: The highways can have 6 or more lanes in one direction. Overhauling even on right lanes is allowed in most states and Americans love to turn on the lanes without changing the direction indicator. This should be adjusted from the outset. The right-hand lane can quickly become the next exit ("This lane must be exit" "Exit only"), so you should generally not go to the far right, so as not to be surprised. In some cases, the exits (exits) also left the motorway. If you miss an exit, you have to continue until the next, to start again there after departure. As with us, turning on the highway is strictly prohibited (no u-turns). For more information on driving on Interstate Highways, see the English-language brochure of the U.S.. Department of Transportation, which can be downloaded online: “Read Your Road: Every Highway User’s Guide to Driving Safely”.

Federal highways are highway-like freeways that run across country regardless of state borders. However, they are not like the interstates without traffic lights and intersection and lead partly through cities and towns. They are abbreviated with "US" and the number of the road, e.g.. "US 40". The traffic signs with the street names are white with a black frame and black letters. The system of odd numbers for north-south roads and even numbers for east-west roads (see above "Interstates") is also found on most federal and state roads.

State or Provincial Highways are child roads marked on cards with a circle. The type of their signposting is determined by the respective US state. Construction and condition of the roads are very different. State highways often change their name when passing through localities. County Roads are roads in rural areas (county is a county in the state). Ranch Roads and Farm Roads can also be more or less paved paths. So: the term "Highway" is used for roads of all kinds and says little about the state of completion of the same.

Some of the major highways, often "turnpikes" called, are charges apply (as well as many bridges and tunnels with Great are occupied). At the beginning of the toll road, if necessary, a ticket can be drawn from a machine (as in the parking garage), which serves to charge the fees at the next toll station; Often you can also go to the toll station (great station) "go through". At the toll station is the "Park Home Rule": who has enough small change with you, pays directly to machines that you can reach from the car with the window open (you throw the appropriate amount in a funnel, of course, faster), who does not pay at the ticket booth with a guard or warder. At the entrance to the toll station you have to line up accordingly. Special problems lurk here on the tourists so not, but you should not present too large bills and have cash at all.

It can happen that one meets several toll stations one after the other on a road and therefore has to pay multiple times (you can not often "go through" and pay in the end, but again no rule without exception). In exceptional cases, the toll fee must be paid in advance for shorter distances.

Place names are not indicated on road signs as a destination, but rather the number of the road and the direction in which the road runs (North, South, west, East). In other words: It is almost exclusively signposted for street numbers and directions. Local destinations are rarely specified (ie "I-20 West", Not "Atlanta"); this applies to streets of all orders.

One can hardly proceed, therefore, if one considers the following questions:

intersections with other roads are called by the name "Jct. ……" (junction) announced. Attention: Departures are usually only on the Interstates one Announced earlier, then the exit itself follows immediately. Within towns, the major intersecting cross streets are usually named by signs that are placed above the traffic lights of the intersection and are easy to read. A very good guide.

Most American cities have a simple and plausible one Road sign system, that makes orientation much easier. From the center of the village, in each of the north-south and east-west directions, one road is designated as a central axis designated by a name (e.g.. Broadway and High street). All subsequent streets are called from the center (that is, where the central axes intersect) numerically in one direction as street and in the other direction as avenues. The 1 st street follows the 2 nd Street, this the 3 rd Street etc. and in the opposite direction this also applies to the Avenues. Also the finding of house numbers is quite simple in this system, since the house number even in the first digit already indicates the block. The house number 475 thus designates a building that can be found between the 4th and 5th street or avenue (400 to 499), the house number 1575 such a between 15th and 16th street or Avenue (1500 to 1599).

As in Europe, there are scenic and touristically interesting itineraries often a bit off the main road on worth seeing side routes, the so-called. "Scenic Byways" (Read: bye bye). It is not difficult to find these roads with their touristic possibilities when planning their journey, thanks to a special website where everything worth knowing about this topic has been collected. The page fhwa.dot.gov/byways/ lists all the interesting secondary routes and classifies them as follows:

The branch lines do not have to lie only on the free land, they can also be found within urban areas. The Las Vegas Strip is also considered a Scenic Byway. The American notion of the worth seeing branch line is therefore very broad and encloses everything worth seeing, not only landscape and culture. The homepage describes every single branch line, has a short road map and names the highlights, partly with further links to the sights along the route. Anyone who is reasonably English can find a source of information here. In addition, you can look online for free a map, in which the Scenic Byways are listed.

Traffic disruption and, especially in winter, the condition and blocking of roads and passports are reported regularly by local television and radio stations; see. in this context also under the view words radio or television. A good source of information also offers various websites on the Internet, especially when it comes to travel preparation and information on previously known impairments due to road repairs or expected winter use restrictions. For an overview of the entire US, see the National Traffic and Road Closure Information website, U.S.A. Department of Transportation. Even more informative are the websites of the Departments of Transportation (DOT) of the individual US states. An overview of the Internet addresses for the individual authorities of the states can be found on the page State Transportation Web Sites. Specially for California also offers the website quickmap.dot.ca.gov.

In our review of various comparison platforms, the provider won cheap-mietwagen.de. The site compares nearly 150 providers from over 170 countries and also has a comprehensive offer for the US. By simple entry of the place and the date including time of the car in the US is found quickly.

In July 2000, the telephone number 511 was designated as the national telephone number for travel information. Since then, more and more states are converting their traffic information to this central call. If you dial 5-1-1 on the phone or click on the corresponding website, you will receive current road status reports, which can be queried from different viewpoints (different from state to state), e.g. for Phoenix, Arizona, the following selections: