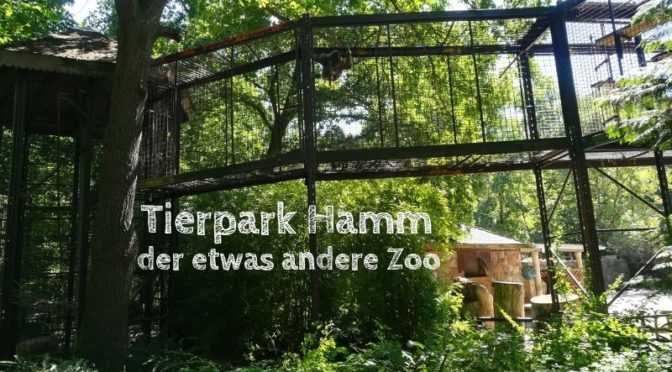 Tierpark Hamm: Get to know Tayras and cuddle alpacas

Actually, I wanted to do everything in a wash and just before our trip to Ireland just write the article about our short trip to the Ruhr. Finally, we enjoyed the weekend trip so unexpectedly good. But when I’m in a hurry, it’s always hard for me to be brief. That’s why there are now just three parts – after all, we have also distributed our program across three cities in the Ruhr Metropolis. It starts with the zoo Hamm, which surprised us very positively.

This article was created thanks to an invitation from RuhrTourismus. It is one of over a hundred authentic experience reports from all over Germany, all based on our own experiences. The full selection can be found here: Over 100 x family holidays in Germany. 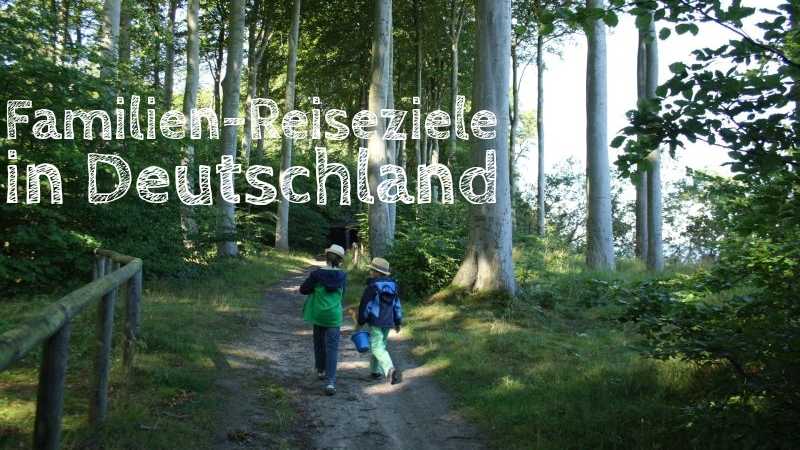 We traveled as a family of four with two boys: Janis (who turned 14 the day before) and Silas (11 years old). We were on the road for two full days in the Ruhr area, because we made our way early on Saturday mornings and after an overnight stay in Essen drove back to Schaumburg country on Sunday evening. 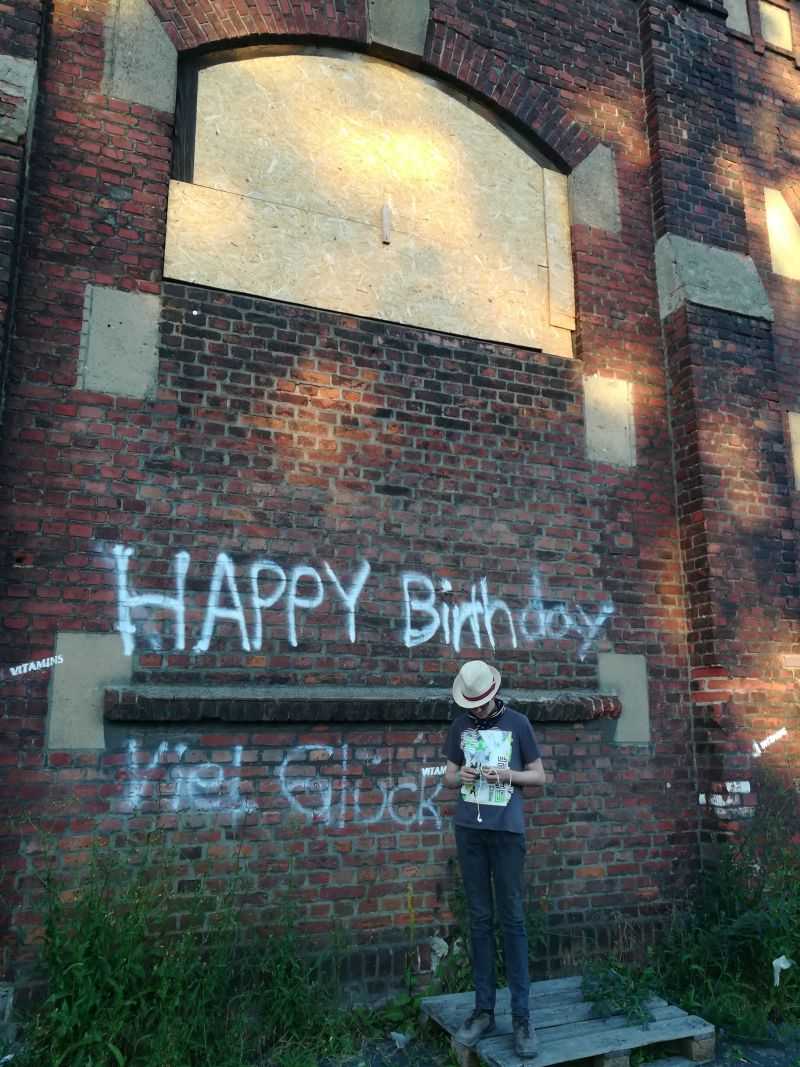 Birthday Janis in the Ruhr area.

[Warning, this could be considered as current advertising, even if it corresponds to my own unpaid opinion. We got the Ruhr.Topcard as travel blogger for free.]

It’s the extra layer that brings us the invitation to the Ruhr area, and it’s the Ruhr.Topcard that gives us a customized program at no extra cost. Since neither of them had said anything to me before, I feel that I have to briefly explain these pot achievements.

Both are inventions to promote tourism and to increase the attractiveness of the region. And both are quite successful in my eyes. 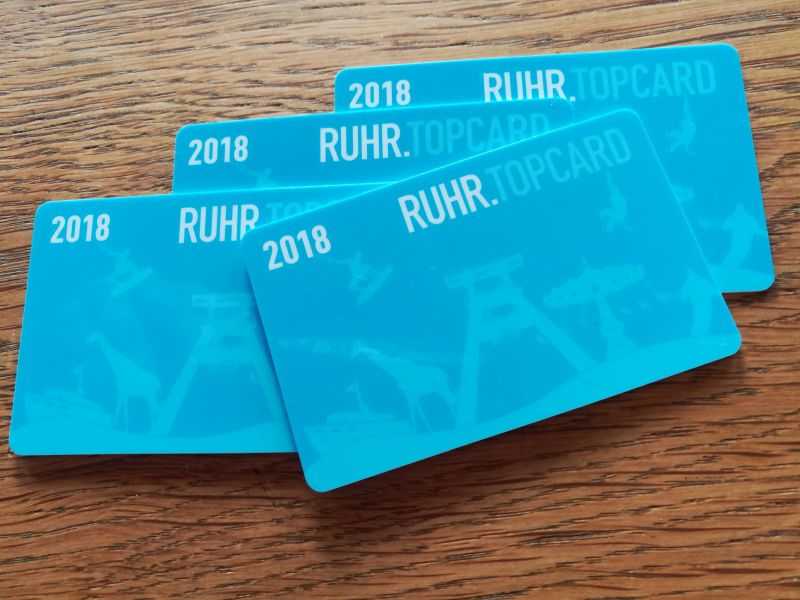 That’s what she looks like, the Ruhr.Topcard. Each family member needs its own.

The Ruhr.Topcard is valid as a full-fledged entrance ticket (usually only once) at 96 entrances in the entire Ruhr area. Another 53 partners reduce the price for cardholders by half. The offer ranges from the Dechenhöhle in Iserlohn to the adventure park in Xanten, from the blacklight minigolf in Duisburg to the Roman museum in Haltern am See. A lot of art and industrial history is included, boat trips on various water surfaces, swimming pools, zoos, planetariums and even the musical Starlight Express (half price in certain categories).

The card costs 54 euros once, for children up to 14 years 35 euros. It is valid for a whole calendar year, and at least inhabitants of the Ruhrgebiet have that determined quickly out again. A list of all partners can be found on the homepage of the Ruhr.Topcard.

Exactly what the extra layer is about, I explain in the Dinslaken article.

Our day at Tierpark Hamm

Since Janis is responsible, the just 14-year-old tells of it in his (almost **) uncensored own words. 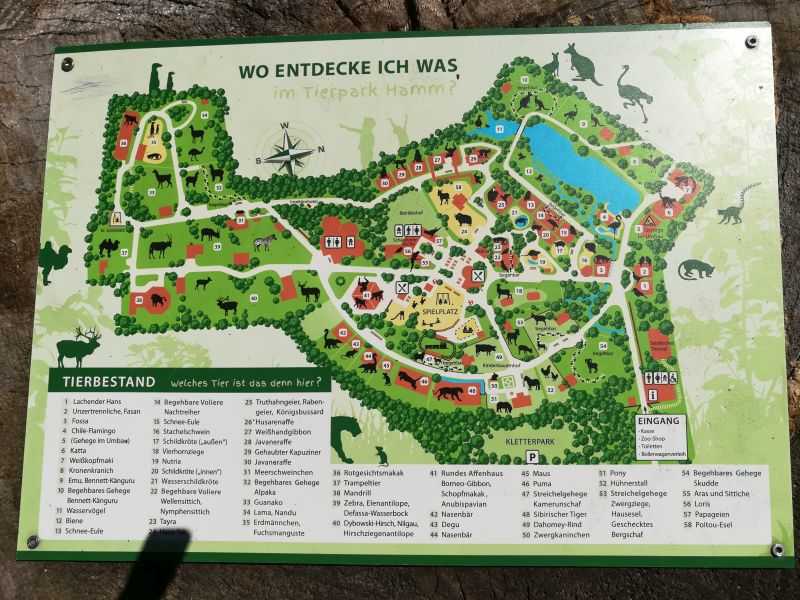 A look at the overview plan of the Tierpark Hamm.

Tierpark Hamm from the perspective of Janis (14)

“My birthday present was that I was allowed to pick something out of the magazine of the Ruhr.Topcard. Mama had marked everything for me, which went. For example laser tag, swimming pools, museums and stuff. I chose something from that as a program for the whole family. I took the zoo because it was the best option in my opinion. I either did not like the other one, or it did not work geographically.

The zoo Hamm was good. It was even more beautiful than hoped. I especially liked the monkeys. Especially the ape baby we christened Gollum because it looked the same. That always stared at you. I also liked the rest of the animals. Donkeys, zebras, tigers, …

I also met some new animals that I did not even know before. The Tayras for example, so marten-related animals, very curious and not shy. They used to loll about us through the bars and wanted to splash on us and maybe eat, haha. I wonder how many visitors have already gotten a whiff of those. “ 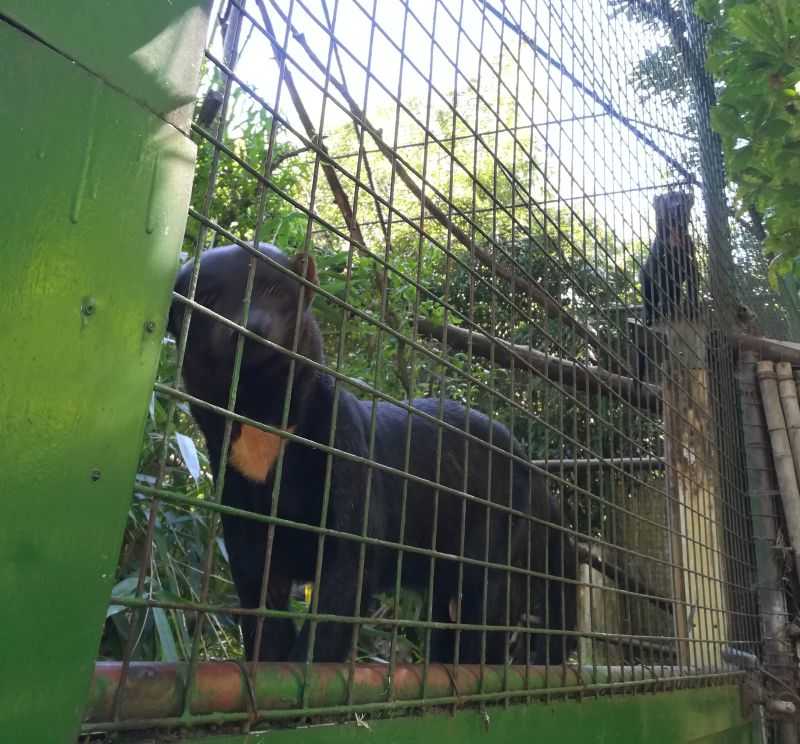 I stupidly had only the cell phone snap with it, and found the lighting apparently not so great, and I have generally far too few photographs. Anyway, this is a Tayra, just before she reaches out her front paw and fishes for the phone.

Also I was really positively surprised by the animal park Hamm. From us, the next zoo is in Hanover, and against that, of course, no animal park can stink. From the presentation Hamm is also rather classic, not overkid with theme area decoration, albeit pretty laid out. 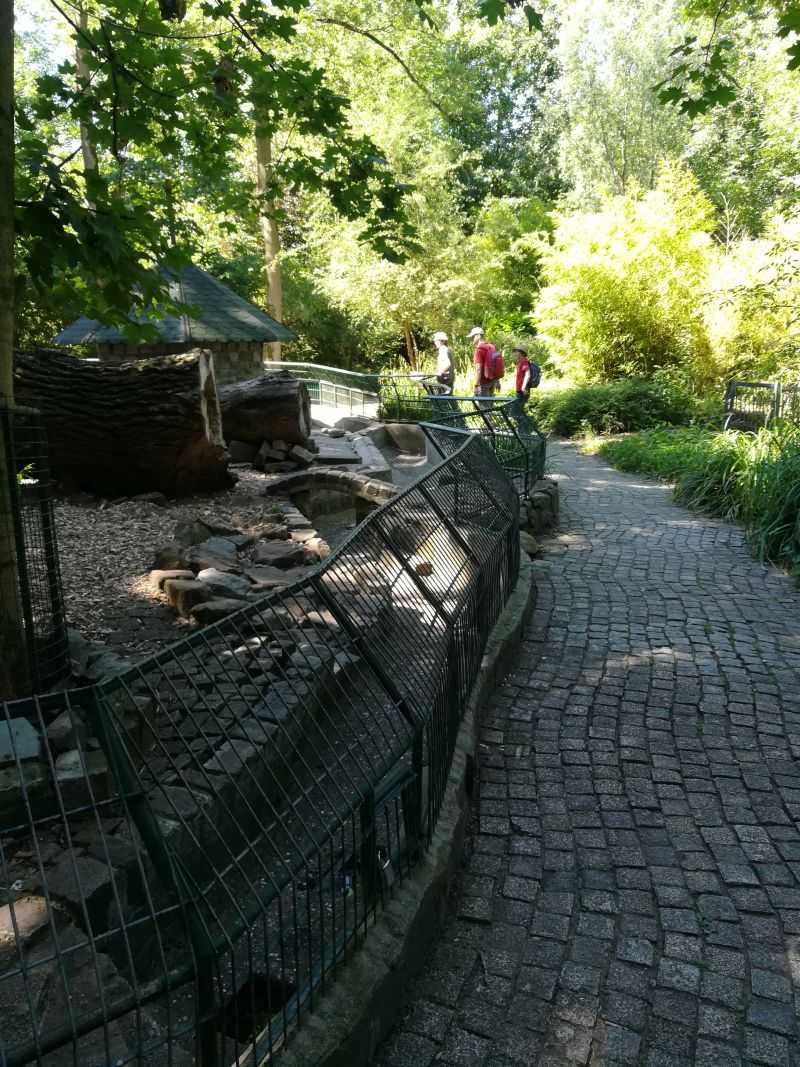 The special feature is that the Tierpark Hamm works wherever possible with walk-in enclosures. Not only to the Bennet kangaroos, visitors can stroll in, but also to various birds, goats and – my personal highlight – the alpacas. Because you are allowed to feed many animals with the food from the everywhere available machines, they are particularly tame and like to come to the fence. So we could not only cuddle the alpacas, but also crawl camels, donkeys and eland antelopes (although we did not buy any food at all, Janis just picked up an empty pack from the floor, which was apparently quite enough to make us magically attractive). I can only imagine that this concept has not only proponents. Each zoo raises ethical questions, and there are always different answers, depending on location and reasoning. At least retreat possibilities were everywhere for the animals, and a lot of staff was always in sight, so that inappropriate behavior would be quickly prevented (I hope).

Really cool, I also found, as already mentioned by Janis, that the animal park Hamm shows especially many unknown animals. That’s how I got to know not only the Tayras but also the Fossas, a curious mix of dogs, cats and martens living in Madagascar. 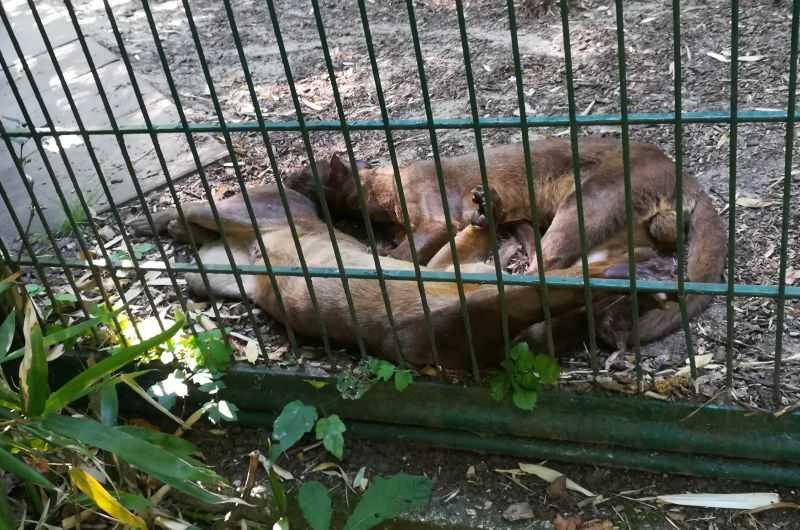 A ball of rotten fossos. Again, not the creme de la creme of zoo photography. As the colleagues really look, you have to look at yourself.

Of course there are also playgrounds (rather for smaller children) and gastronomy. Next door is equal to a climbing park (which offers special half-price arrangements for owners of the Ruhr.Topcard).

The Tierpark Hamm: Our conclusion

We had a really good morning in Tierpark Hamm!

In three hours we made the tour along all enclosures. Had we not had fixed program points in the afternoon (keyword extra layer), we would have liked to have more time.

We are not zoo experts, have no comparable values ​​in the Ruhr area and otherwise only know the Zoo Hannover and the Zoo Rostock (and the Wildpark in Bielefeld). So I can not say with certainty that the zoo Hamm is the best zoo in the Ruhr area.

But that we liked it, that’s an undisputed fact. And you always have the feeling of being in the middle of it all.

opening hours: daily from 9am to 5pm, from March to October until 6:30 pm.

entrance fees: Adults 7.50 euros, children (from three to 18 years) 4.50 euros, from two children pays the family card (if both parents are there). With Ruhr.Topcard one-time free admission.

More info is available on the homepage of Tierpark Hamm. 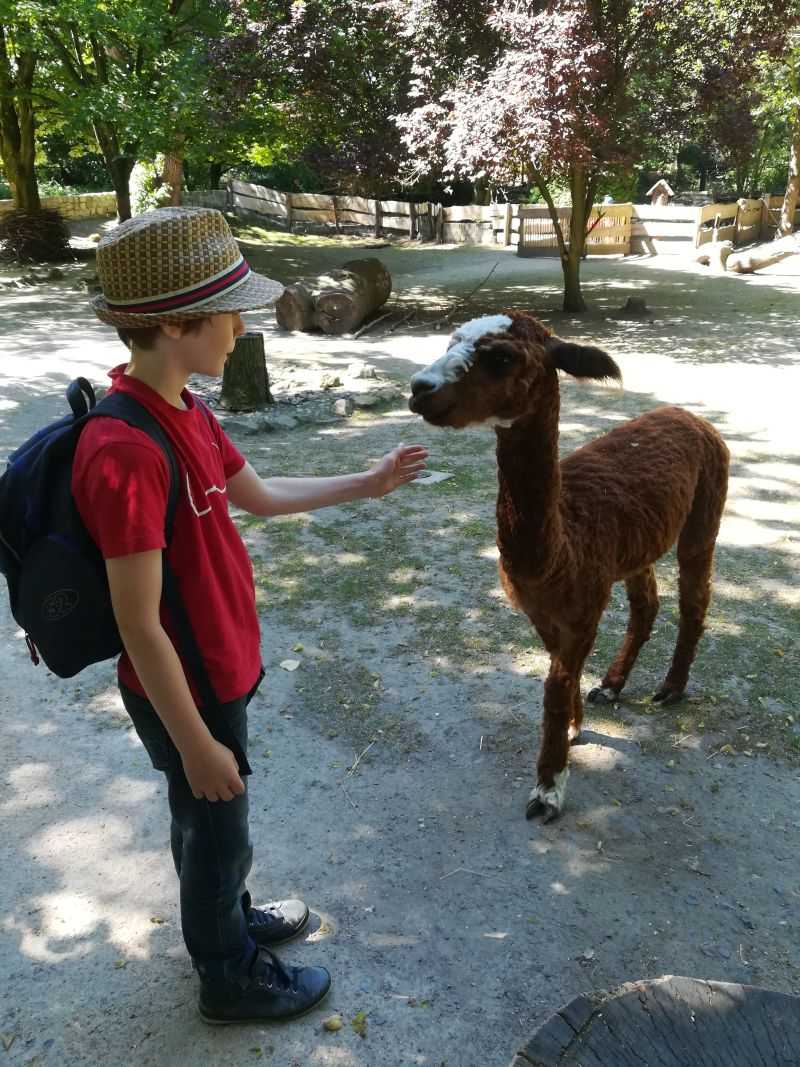 Silas and the alpaca child meet at eye level.

transparency Note: We were invited by RuhrTourismus to the Extraschicht and otherwise would not have landed so quickly in the Ruhr, so: happy coincidence. The association has provided us with the Ruhr.Topcard and also organized the overnight stay free of charge for us at the Atlantic Congress Hotel Essen. We are very grateful for that, but that does not mean that our opinion or even the coverage was bought. Since I’m completely free, no one talks to me, otherwise I would not do it (or if that would be advertising, and THEN I would write it also big top).

** Of course, I make sure that the boys do not give anything completely inappropriate to protocol, I have here finally a education order. And clearly I steer the conversation, which I otherwise log verbatim, with demands so that it does not remain with a sentence. But the statements are all 100 percent real Janis.