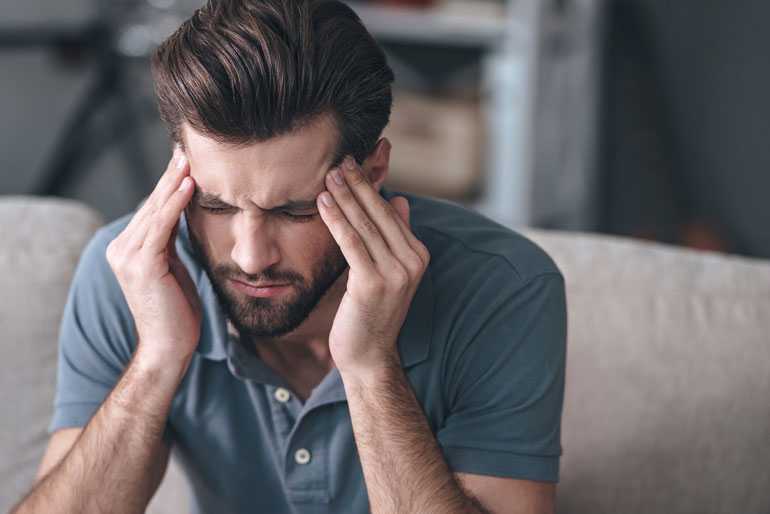 . This can compensate for pre-treatment or as a therapeutic measure incorrect stress, relieve the joint and protect the teeth from further damage by bruxism. In a large number of cases, interdisciplinary collaboration with physiotherapists helps to relieve the pain and even make a full recovery.

The oral cavity is the entry portal for the entire digestive tract. Here, the food is minced, eingespeichelt and then forwarded. The teeth, the masticatory muscles and the temporomandibular joint play a decisive role here. They have to be coordinated. If this is not the case, far-reaching complaints can occur.

The temporomandibular joint in the human body accomplishes countless tasks every day. It is almost permanent in use and never lets us down. It starts already in the morning when having breakfast, when we eat the food or talk during the day.

However, it can suddenly start to hurt and crack. The movements become uncomfortable and everything feels somehow stiff and firm. Some people suffer from tinnitus, dizziness, neck, shoulder and back pain or have frequent headaches / migraines, as well as enamel cracks in the front teeth or recognizable frayed incisor edges, broken out tooth fragments (wedge-shaped defects) on the gum line or from existing fillings. These symptoms can be sequelae of craniomandibular dysfunction (CMD), a disorder of the temporomandibular joint.

The affected people usually have a long ordeal behind them, because the connections of the temporomandibular joint, teeth and periodontium are very complex. Only the harmonious interaction of all components ensures quality of life and freedom from pain into old age. Diagnostics as part of a functional analysis is the first step in order to be able to accurately assess the malfunction. On the basis of this diagnostic data determined in advance, we determine the optimal therapy for you.

An occlusal splint can compensate for pre-treatment or as a therapeutic measure of stress, relieve the joint and protect the teeth from further damage by bruxism. In a large number of cases, interdisciplinary collaboration with physiotherapists helps to relieve the pain and even make a full recovery.

Teeth Grinding (Bruxism): Under the 2 links you will find tips and exercises that can be used to alleviate the symptoms 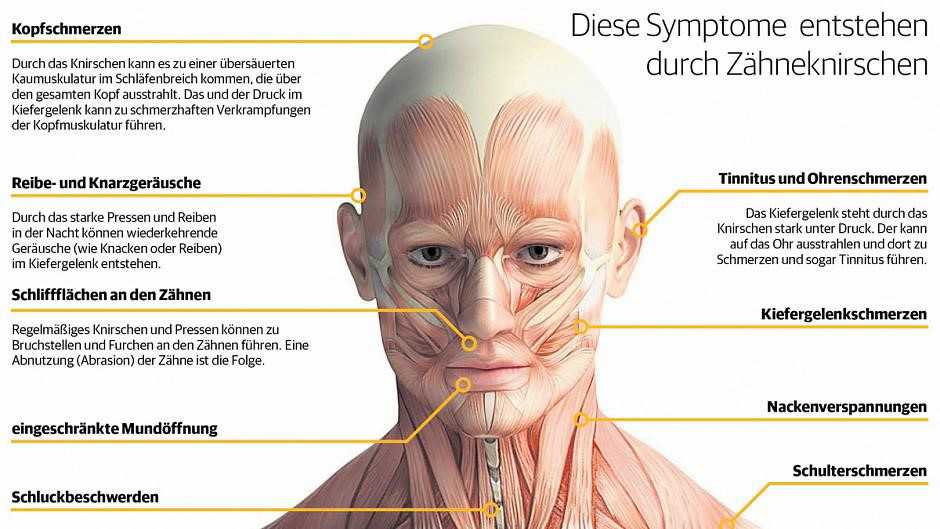 At night, many unconsciously grind their teeth. The consequences can range from tooth wear to blurred vision and back pain. We explain what happens to the crunch in the body and show in a video, with which exercises you can tackle the complaints yourself.

The dentist looks with horror on the abrasion. The physiotherapist feels cigar-thick hardening in the neck muscles as well. The ear specialist hears the complaint about a strange tinnitus, although the patient hears perfectly. The orthopedist has to take care of problems in his shoulder. The ophthalmologist checks curious loss of vision. The neurologist is already considering the use of a neurotoxin. The internist cares about sub-optimal levels of nocturnal oxygenation. And the psychologist peers deeply into the soul of a patient whose nakedness seems to be senseless at its nights.

Eight cases? No, only one. But that makes things so complicated. Here everything hangs together, and as so often in medicine, the symptoms overlap and unexpectedly point to other specialist responsibilities. And indeed, this is a suffering that is difficult to grasp and difficult to treat. It is a common disease: bruxism, teeth grinding. It often occurs as a result or as the cause of another disorder, craniomandibular dysfunction (CMD). This monster also in the jargon describes a dysregulation of the jaw musculature and joints as well as the Zahnkontaktes; This can be seen in an overstretched and cramped masticatory muscle. The construction sites of the CMD is already tearing its name: "cranium" is the skull, "mandible" the lower jaw.

Dentist’s splint The dentist quickly sees the destructive work of the patient, who crunches at night. His decision is economical and wise: the teeth must be prevented from harming each other. Therefore, a crunching rail is adapted to the patient. He wears it at night, and henceforth his teeth are protected. And the ears of the partner or the partner in bed as well. From the crunch the environment hears a lot, his producer, however, a little. It’s like snoring: no snorer will get it. Anyone can also hear the rubbing and cracking in the temporomandibular joint. For the dentist, it is another indication to do more research. What is the tooth level? Is there something missing? Are crowns too high? How does the patient actually chew? Does he get the food from one corner to the other? Do we have to x-ray? It is clear that the crunching splint has a symptomatic effect and corrects the consequences for the teeth. Their feedback to the brain, however, is not so strong because the crunch hardly crunches less when it carries a splint in the mouth. He does no more damage. By the way, some people also crunch during the day under stress – hence the saying that they clench their teeth. These are the people who are afraid of the jaw, the "mandible", can not fall off anymore. She is stuck.

As a means to relieve the teeth and muscles, the bite splint has been proven. 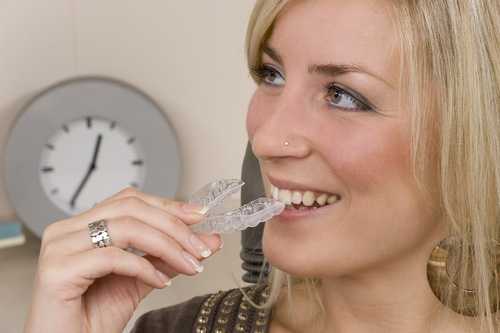 Grip in the muscles Good dentists and good physiotherapists with CMD qualifications get a closer look at this enormous force in the jaw. They see it with their own eyes: how the jaw opens asymmetrically and closes again. How he seems to lock up. How the mouth does not really want to widen anymore. How the teeth do not optimally over each other. Anyone who has ever experienced a detailed physiotherapeutic history in a CMD-suspected patient will be amazed that even the most discreet and well-mannered patient can scream an ambulance room out of sheer pain. There are a couple of rogue dogs in the outer and inner masticatory muscles, which are already highly sensitive to slight kneading. These muscles are called temporalis, masseter or pterygoid; also some others would know the pro to name. The diagnosis is followed directly by therapy in the best case. The patient is able to make these muscles themselves and massage them precisely. Massage the masseter! This should only be done according to instructions, otherwise you knead wrong. Of course, every physiotherapist also inspects the neck muscles of his CMD patient, because it is not uncommon to be just as tense – forces from above, which continue one floor below. Anyone who then goes alone to massage or physiotherapy, the temporary only helps the neck, but does not stop the problem. It’s the CMD. She even radiates in the head. If she is strong, she hardly knows grace. And good neurologists can even document a CMD by stabbing the affected muscles and measuring their activity through electro-myography (EMG).

Near the ear It is one of the peculiarities of human anatomy that in some regions very close to each other. For example, the temporomandibular joint and the ear: there are nerves, muscles, tissues, tendons, bones, blood vessels, tubes, ligaments, mucous membrane next to each other in a few millimeters – and of course a CMD can also contaminate the environment. There are not a few patients with ear noise (tinnitus), in which the hearing test is virgin, which baffles the ear doctor: tinnitus is indeed often associated with a hearing loss; In any case, it is classically considered an ENT construction site. In fact, CMD patients who complain of an ear noise are not exactly rare. The eye can also suffer. Unfortunately, it is one of the peculiarities of the medical system that the border traffic of the diagnosticians often seems to be blocked by barriers (including incompetence).

Heal the soul? As with all diseases, the search for their topsoil is tedious. Why is the crunch crunching? What does he experience at night? What is his soul doing? What is she molesting? Why does it rage in the lower jaw and teeth instead of hitting the table? Such questions exceed the competence of the dentist and all other specialists, they fall into the field of psychotherapy. And only in very experienced neurological hands belongs botulinum toxin, Botox for short. This neurotoxin can paralyze the particularly restless muscles a bit. But who can do that with him, nothing else has to help.